If there is a place in the world that does not require an introduction, it is Barcelona, ​​yet it never hurts to remember all the things that make this city an incredible place. It is one of the most important cities in Spain and chosen by people from different parts of the world, both to visit and to stay to live.

It is home to the stadium with the largest capacity in Europe and which saw the best soccer players in the world play, one of the most beautiful parks in the world such as Park Güell, the only concert hall in the world that has been declared a World Heritage Site by UNESCO, of incredible architectural works even if they are not finished, such as the Sagrada Familia, and of course the famous Ramblas, to name just a few things.

The wonder that is Barcelona, ​​the capital of the Autonomous Community of Catalonia, is the result of the combination of its history, its culture, its architecture, its green spaces, its beaches, its people. Whether you visit the city for 24 hours, for two days, for three or longer, there are things that you cannot stop doing, such as touring the works of the great Gaudí, getting to know the Tibidabo mountain and visiting excellent corners that the guides of Tourism often skip.

An amazing city wherever you look, with lots of entertainment and places to visit where time never seems enough, and that is why here we help you to have everything you need to know close by when you are in Barcelona. 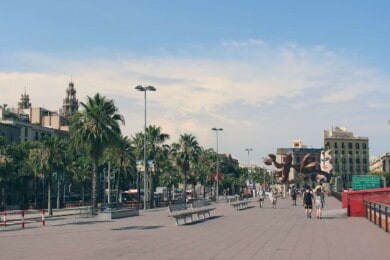 Natasha Sofía Jara August 3, 2021
Receive our content on your mail!