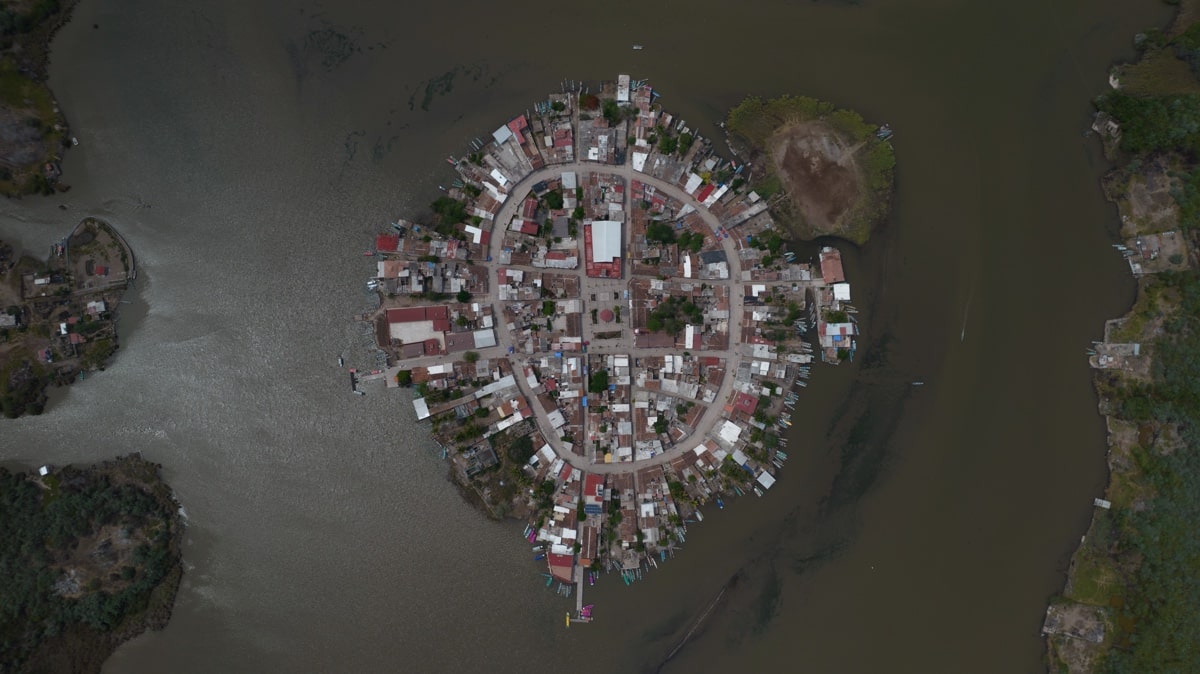 Various meanings have been attributed to the origin of the name Mexcaltitán: for some it is “place of herons”, and others translate its name as “in the house of the moon”. Although popularly it is also known as the Venice of Mexico, and it has earned this name since it is an island that floods in the rainy season and its streets are traveled by boats.

Many historians consider Mexcaltitán the birthplace of Mexican identity, since from this island the Mexicas originally set out on their journey to find Tenochitlán, which eventually became Mexico City, the capital of Mexico.

Located in the Riviera Nayarit northwest of Santiago Ixcuintla, this magical town is undoubtedly a hidden paradise that you should know.

You can only get here via a 15-minute boat ride. If it is shrimp season you will likely notice local fishermen in the waters catching shrimp for local Mexcaltitán restaurants.

It is a small place, it is approximately 40 meters from north to south and 360 meters long from east to west. Currently the island’s population is only 800 people and its history goes back many years.

It was decreed in 1986 as a Zone of Historical Monuments, and is distinguished by the picturesqueness of its tile houses and the tranquility of its small streets. The artisans of Mexcaltitán are known for their articles made from mangroves, for their barcinas (spheres created with blanket and palm leaves) used to preserve dried shrimp.

Shrimp fishing is the main economic activity of the inhabitants of the Mexcaltitán Island. Many fishermen start their day at 3 am during the high season between May and August, so they have the afternoon free to rest and relax in the billiard rooms. The few local Mexcaltitán restaurants on the island offer fresh shrimp on their menus, including the famous shrimp tamales.

In addition to the houses and wide streets, the island is home to a beautiful church and the Museum of El Origen, located in the Central Plaza. In the Mexcaltitán museum you can find a variety of archaeological pieces from Mesoamerican cultures.

There is only one hotel in Mexcaltitán, Nayarit; It is called Hotel Ruta Azteca. This family hotel is simple and offers visitors everything they need to visit the island, its rooms offer panoramic views of the lagoon.

What to do in Mexcaltitán?

It is an archaeological museum located in the central square in front of the church of San Pedro and San Pablo in which a collection of various pieces is exhibited Mesoamerican cultures. Among them they abound in the Mexican culture due to its origins. You will find a replica of the Boturini Codex, which narrates the migration and origin of the Mexica. The museum also shows the history of the island and of fishing in pre-Hispanic times.

Something that can be seen in this house of culture is the mural painted by José Luis Soto, made with ceramics, obsidian, glass, sea shells, flagstone, talavera and marble.

In addition, pottery workshops with clay and the elaboration of baskets with red mangrove are offered.

The feast of Saint Peter and Saint Paul

San Pedro and San Pablo are the patrons of the place, and their feast is celebrated in the last week of June, on the 29th. It is a procession to bless the waters. The ceremony culminates in a battle between saints: the entire town is divided into two rival teams (each with an image of each saint); They choose their sailors and they compete in a boat race around the island.

It is a healthy and colorful holiday, full of music, dance and food. This tradition is a kind of offering in order to obtain a good catch in the following season, since shrimp fishing is the main economic activity of the town.

Local artisans make articles made with materials from the mangroves in the area, especially red mangroves. Barcinas, for example, are spheres made of blanket and palm leaves for the preservation of dried shrimp.

Its gastronomy is characterized by coming from pre-Hispanic recipes. Their typical dishes are bearded shrimp meatballs, shrimp filled tamales, shrimp soaked in lemon sauce with chili, tlaxtihuilli or tixtihuil (which is a shrimp soup), shrimp pate and aguachile. But also the zarandeado fish, the grilled lisa (which is a type of fish, oysters in their shell and the beef, poultry or pork tacos accompanied by cheese and chili are traditional.

Don’t leave without trying these dishes accompanied by a cold beer in its different restaurants that offer views of the Great Lagoon.

There are only two hotels in town: Hotel Ruta Azteca, a family establishment with views of the lagoon, and the newest Hotel La Gran Tenochtitlán.

If you are looking for more hotel offer then you should stay in San Blas which has equally comfortable hotels such as Garza Canela, Hacienda Flamingos or Casa Mañana, and, incidentally, eat at the La Alberca restaurant.

How to get here

Once in the municipality of Santiago Ixcuintla, you should go along the path that leads to Sentispac and continue towards the La Batanga pier. This is where the boats that take you to the Island of Mexcaltitán are boarded.