The 5 places in Italy that inspired Luca, the new Disney and Pixar movie 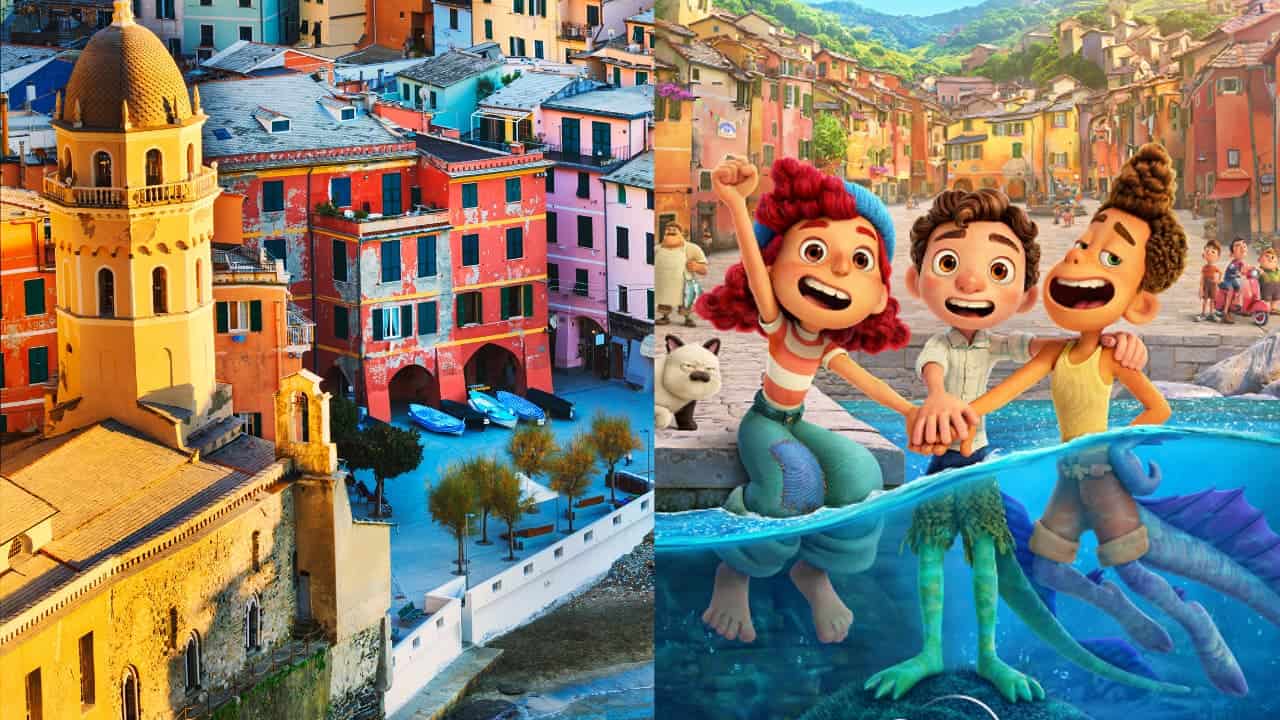 Luca is the new Disney and Pixar film, directed by Enrico Casarosa and where not only the story of how beautiful friendship is is told but t also allows us to take a look at the beautiful landscapes of Italy . Could you ask for a better combination?

As the relationship between Luca, Alberto and Giulia, three of the main people, is recounted, Casarosa shows us a fishing village with picturesque streets. It is Portorroso , a place that only exists in fiction but that is inspired by a region of Italy that extends for 18 kilometers of cliffs and that is related to the director’s childhood : Cinque Terre.

Places in Italy that inspired Luca

It sounds like one but in reality there are five places in Italy that inspired Luca, they are very beautiful and we will tell you about them below.

Cinque Terre means “ Cinque Terre ” in Castilian Spanish, and it is one of the most incredible places in all of Italy. It is located on a coastal strip that is formed, as its name implies, five towns and all of them are located on the Italian Riviera, in the province of La Spezia, Liguria.

Each of these places, one more beautiful than the other, was a key component for Luca’s production designer, Daniela Strijleva, to create the universe of Portorroso, the place where Luca and Alberto, the protagonists of the film.

The five towns that make up Cinque Terre are Monterosso, Vernazza, Corniglia, Manarola and Riomaggiore, and they are all connected to each other by different trails that hold them together as one. In addition, the five towns were declared a World Heritage Site by UNESCO.

They are places of unparalleled beauty, both for their gastronomic offer and for the landscapes they have to offer, surrounded by vineyards and hills and located on the seashore . Next, we will tell you a little about Cinque Terre, the 5 places in Italy that inspired Luca.

Monterrosso al Mare , also known as Monterosso to dry, is the largest, westernmost and most populated town in the Cinque Terre . Undoubtedly, its name is very similar to the name of the town where Luca lives and it is because it is one of the places in Italy that inspired him.

Located in the center of a small natural gulf, the town is divided into two sectors : on one side is the old part and, on the other, the modern part . Both are connected by a tunnel, and in each of them you can see different things.

The oldest sector of Monterosso stands out for having only pedestrian traffic, with small cobbled streets and shops where it is possible to find typical products of the region, be it wines or gastronomic dishes. In addition, something that stands out in this part particularly is the church, opposite the main square, for its sublime architecture.

On the other hand, the modern sector is known as the “ Fegina zone “, there you can find architectural buildings with more modern characteristics and more striking colors. Among one of the main attractions is a panoramic trail that offers an unparalleled view of the area.

Of these places in Italy that inspired Luca, Monterosso is the one with the longest beaches, in fact it is considered to have the best in the area, and it is one of the towns that has the best offers in terms of accommodation. .

Vernazza is one of the towns that are located in the northern part of the Cinque Terre. It has an area of ​​ 12 square kilometers and a population that, until 2017, did not exceed a thousand inhabitants.

This town, one of the five places in Italy that inspired Luca and which is also considered a World Heritage Site by UNESCO, is traffic-free. It can be accessed by one of the trails that connect all these towns, either from Monterosso or from Corniglia.

It has colorful houses, with balconies, you can see them grouped next to the imposing cliffs, and that’s not all. The small town has its own natural harbor, a church by the sea and the Doria castle . In the latter there is a tower, known as Belforte tower , which offers a 360-degree view of the city.

Right in the center of Cinque Terre is the town of Corniglia. Of the five villages that make up this area, it is the smallest. It has a total area of 2 square kilometers.

Something that distinguishes this small town from the other four places in Italy that inspired Luca is not only its size, but that it is the only one that is not directly connected to the sea, but is about 100 meters high. In addition, it is surrounded by vineyards.

The smallest town in the Cinque Terre can be accessed by the road that connects it to the train station or through a stairway known as Landarina , and consists of almost 400 steps.

Manarola is the oldest town in Cinque Terre and is part of the municipality of Riomaggiore. It is laterally limited by the Ligurian Sea on one side, and by the Apuan Alps on the other. The latter is a mountain range that emerges from the Apennines.

In terms of area, it is the second smallest of the places in Italy that inspired Luca. Among the activities that stand out the most in this town are fishing and viticulture. In fact, the local wine, Sciacchetrà, is of great renown.

This small Cinque Terre site is linked to Riomaggiore by a path called Via dell’Amore, Path of Love. In addition, the village is surrounded by vineyards and hills and, of course, has with the characteristic colorful houses that are typical in the region.

Of the places in Italy that inspired the movie Luca, Riomaggiore is the most eastern of the five . With just under 2,000 inhabitants, it is characterized by the colorful houses with two or three levels and the Mediterranean vegetation that can be found in natural spaces.

It is a very quiet fishing village and is also considered one of the most beautiful towns in the Cinque Terre.

Among the most characteristic sites of this picturesque place are two churches from the 14th century, the Riomaggiore castle from which you can have a panoramic view and the Via dell’Amore that connects it with Manarola.

In our reality it is not possible to visit Portorroso, the place where the adventures of Luca and Alberto take place with Giulia. However, that doesn’t mean we can’t enjoy the amazing sites that inspired it.

Where to see the movie Luca?

From the outset, the wish of the producers of this beautiful story was for the film Luca to be released in theaters, however the Covid-19 health crisis forced a change in plans and it had to resign itself to appearing in the big screen.

The truth is that its premiere has us all fascinated and the good news is that it is not necessary to leave home to see it -or worry about the restrictions imposed according to your place of residence-: the Disney+ platform has launched this new production Animated for all its users since last Friday, June 18.

So, how to watch the movie Luca on Disney+? It’s very simple: if you are not yet a user of the platform, you must subscribe to Disney+ to be able to enjoy the exclusive content that was launched and will continue to be released there exclusively.

Discover Burano in pictures: the perfect getaway that you cannot miss if you visit Venice

Find out more of
Italy
More of Italy

Trastevere: What is it like and what to see in the most charming neighborhood in Rome