These are the 10 best places to visit near Las Vegas 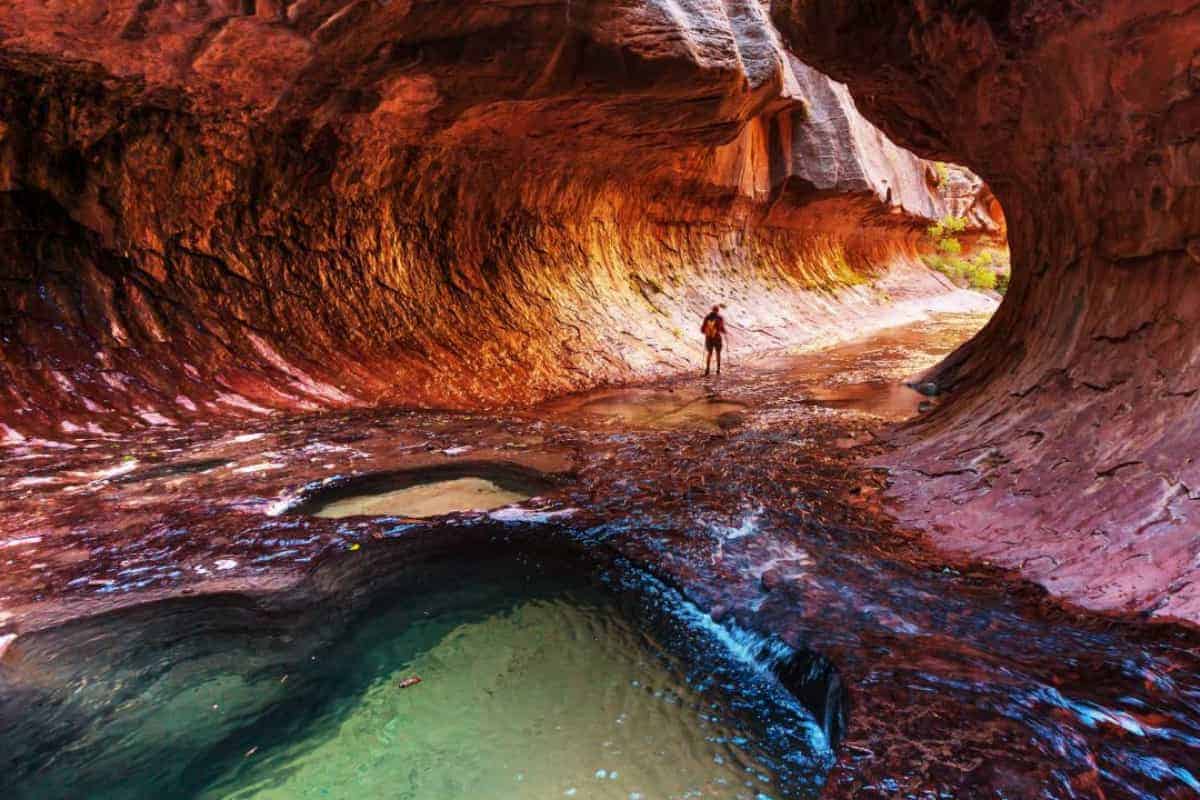 “ Long live Las Vegas ” sounded Elvis Presley, one of the greatest references in music and about one of the most illuminated, entertaining and fun cities in the United States: Las Vegas, of course. The oasis of casinos and luxury hotels in the middle of the Mojave Desert, in the Nevada desert, the mecca of gambling, nightlife and entertainment, is one of the most chosen destinations for visit by all those travelers who are traveling, especially, the western United States.

But is there something to visit around Las Vegas? Beyond the magnificent Avenue The Strip, there are several ideal places to visit near Las Vegas, without having to travel too many kilometers and having the opportunity to travel to natural places, historical and cultural. In this post, we will tell you which are the 10 best places near Las Vegas to visit.

Did you know that you can literally see the lights of Las Vegas from space? Find out here more curiosities of Las Vegas that you probably did not know.

1. The Grand Canyon, one of the best places to visit around Las Vegas

How could we not start our list with THE place to visit in the United States, which, far or near any tourist attraction, many travelers have thought at some point: visit the Great Canyon. The confusingly called Grand Canyon of the Colorado (not because of the state, but because of the Colorado River), is one of the wonders of nature : a gigantic gorge 446 kilometers in length and more than 1600 deep, formed by the Colorado River, forms a landscape seen only in dinosaur movies (it is believed that its formation began more than 2 billion years ago).

Visiting the Grand Canyon, despite being less than 300 kilometers from Las Vegas, is one of the excursions most required by the most adventurous travelers, not only for the landscape that is sought and the most extravagant formations that surprise curious tourists, but for the variety of ways in which they can visit it such as by car, by bus, by helicopter, by plane or on a 1-day excursion to the Grand Canyon from Las Vegas.

2. Springs Preserve, an ideal alternative to know what to do in Las Vegas with children

Finding what to do in Las Vegas with children can be a complicated matter, especially if you visit in winter, when the hotel pools are not enabled. However, less than a 15-minute drive from Las Vegas is Springs Preserve, a great alternative (for adults and children) to enjoy near the City of Casinos.

Springs Preserve is a museum, gallery, an opportunity to enjoy water games in summer, a set of gardens and hectares of sustainable trails that, in addition to forming a beautiful lung in the middle of the desert, tells the story, in a dynamic and entertaining way, of the evolution of the desert to the great city of Las Vegas.

Although the mayor himself assures that it is still in operation, walking the silent streets of Nipton can be quite a suspenseful journey. Like a ghost town, Nipton, located less than 1 hour from Las Vegas, is a great destination to visit (in a few hours) and discover what really happens in this town of 16 people, a single tent and some eco-friendly cabins for those returning from excursions.

Less than 20 minutes by car from Sin City, Tule Springs is a great place to visit, especially if you travel to Las Vegas with children, a different route through a park, declared a monument of national interest, which preserves fossil remains of different species such as mammoths, lions, camels, bison and wolves, as well as extinct species.

Not only the fact of having these exhibits more than unusual and ideal to know and visit, but the park itself is an excursion in nature, different from what to do near The Strip.

In the middle of the desert, about 30 minutes from Las Vegas, as well as cutting with everything known and contrasting with the environment that surrounds it, is one of the most curious works of art in the region: Seven Magic Mountains.

The artwork was created by artist Ugo Rondione who, for all travelers who appreciate art, is a creator of magnificent and completely unusual works to see. In this case, the author wanted to represent the creation of man in a natural environment, creating totems of different colors almost 10 meters high and weighing between 10 and 25 tons.

6. A different tour to Area 51, a curiosity to see around Las Vegas

Do aliens exist? Have UFOs Visited Us? What’s in area 51? Why can’t Google Maps find it? Surely we have all asked some of these questions at some time in our lives and being in Las Vegas, it is one of the most chosen and required excursions by travelers: a tour to Area 51 from Las Vegas.

There are many theories and explanations on what exactly Area 51 is but few clarifications on what exactly is done. The reality is that visiting Area 51 involves visiting sites that have been named a few times in the news : traveling the extraterrestrial highway, knowing the Black Mailbox, the meeting point of UFO fans, the base military aerial and ancient petroglyphs. Truth? Inventions? For now, we won’t know.

Tours can be booked at hotels or travel agencies in Las Vegas, as well as sites used by travelers in different parts of the world such as Get your Guide, Viator or Expedia.

7. Valley of Fire, an enchanting natural site worth visiting in Las Vegas

Valley of Fire (or Valley of Fire) State Park is one of the oldest parks in Nevada and a great recommendation to feel like an explorer a few miles from the City of Lights and The Strip. Thousands of years and the wind that has flowed through the area, have created the most curious formations of red sandstone, perfect to be part of any type of unusual film set.

Within the park, there are also petrified trees and petroglyphs, belonging to those who inhabited the place, according to the records, more than two thousand years ago, located along the different trails that make up the park.

8. Antelope Canyon, from a hidden place to the most sought after site by instagramers

If we are talking about strange formations near the City of the Game, then one of the unmissable places to do near Las Vegas is Antelope Canyon, today, one of the places more instragrammed of all the canyons of Arizona.

Why? The erosion of millions of years has created a slot-shaped canyon that, when visited at the right time, the “Golden Hour” (at 12 noon), all the light enters through the main hole, creating a landscape worthy of aliens.

Antelope Canyon is located on the land of the Navajos, one of the tribes belonging to different states of the western and southern United States, so being private property, it is necessary to take the excursion with a professional guide.

Traveler fact: less than an hour from Antelope Canyon, is the most famous rock formation in all of Arizona that is called “The Wave” ( la ola, in Spanish), a “work of art” created by the erosion of the winds, definitely one of the places in the world that seem made by aliens.

The Zion National Park is one of the most incredible Recommendations that we will make for those travelers who seek to venture, not only a few kilometers from Las Vegas but for those who are traveling the west of the country. In this case we are heading to just over 250 kilometers from Las Vegas, towards the state of Utah, where one of the best national parks in the country is located, made up of more than a thousand different plant species and hundreds of animals.

In addition, following the theme that is seen in most of the “desert” parks, Zion National Park has natural trails to reach rocks of different shapes (also formed by erosion) and the protagonist: the Zion Canyon about 24 kilometers long and up to 800 meters deep which, unlike the Grand Canyon, has more vegetation.

10. Hoover Dam, an alternative route, but ideal for those looking to visit attractions a few kilometers from Las Vegas

Just 45 minutes from the city of Las Vegas is the Hoover Dam, one of the largest reservoirs in the country and one of the highest dams in the entire United States, with 221 meters of height with respect to the Colorado River, containing Lake Mead, built to contain the overflows of the river itself.

The tour is extremely interesting and ideal to “escape” with the children of the bustling city. Many travelers choose to do the traditional tour of the interior, which goes through the most important sites of the dam such as the generator, key points to see the fall and feel the force of the water and other panoramic points to admire the magnitude of the Colorado River and Lake Mead.

On the other hand, for travelers with a bigger budget (and less vertigo), one of the most popular excursions is the plane overflights over the dam, which last 20 minutes but provide views incredible of all the construction.

Las Vegas, the city where getting bored is impossible, where casinos and hotels stand out in the middle of the desert that, despite being considered “The City of Gaming” has hundreds of natural and historical attractions to visit. a few kilometers from the mythical The Strip, open to all types of public.

Find out more of
Las Vegas
More of Las Vegas