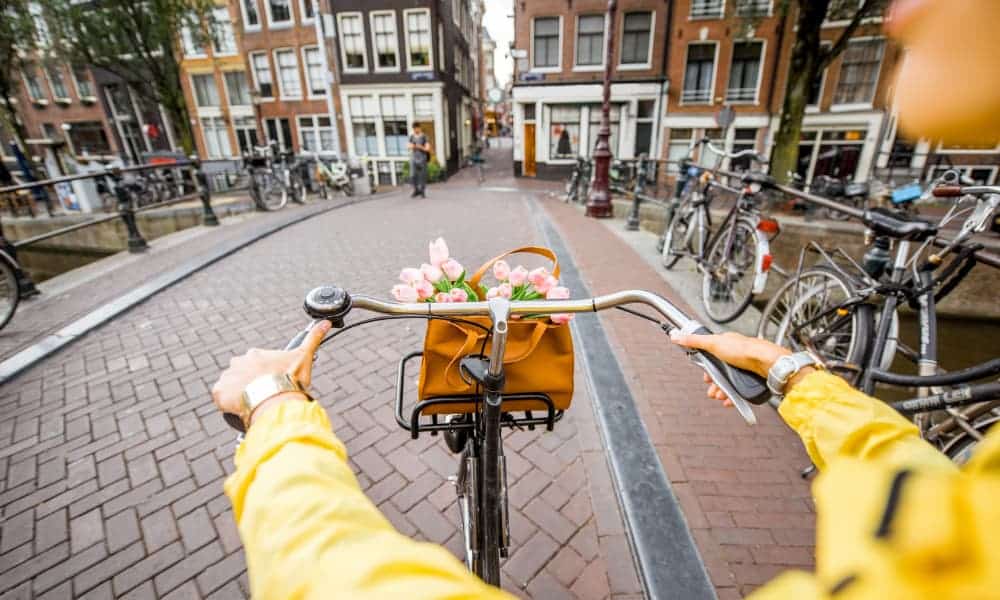 Exploring Amsterdam by bicycle is a kind of attraction in motion, one of the many things that, as travelers, we cannot miss when we visit the Dutch capital. Amsterdam is one of the European cities with the most bicycles per inhabitant and that is why touring the city and its surroundings “on a pedal” implies not only connecting with the city itself, but also with the way of life of its inhabitants.

Touring Holland by bike is a great opportunity to discover landscapes, computer screen postcards and colorful tulip valleys, when the season permits.

Do not miss this post where we will tell you which are the 8 best routes to explore Amsterdam by bicycle and its surroundings (always starting from the capital city), what to take into account and what are the paths most recommended.

Index ocultar
Why visit Amsterdam by bike?
Amsterdam by bike: routes around the city and its surroundings
1. Exploring Amsterdam by bike: a city tour
& nbsp; 2. Cheese, clogs and windmills in Zaanse Schans
3. Utrechtse Heuvelrug National Park: with lots of nature, ideal for cyclists
4. To Marken Island, a great cycling plan a few kilometers from Amsterdam
5. The Amsterdam Forest, a super local place to visit
6. Tulips in Holland, a classic bike route
7. Along the River Vecht: a journey through the history of Holland
8. Cycle around Amsterdam like a Dutchman through Lange Linschoten

Why visit Amsterdam by bike?

Bicycles in Amsterdam are a classic, not only in its capital city, but also in the rest of the Netherlands. There are studies that indicate that in Amsterdam there are more than 600 thousand bicycles for 750 thousand inhabitants residing in the city, at least by 2021, being, by far, the most chosen means of transport for the Dutch. Is one of the best cities in the world to visit by bike? Sure you do!

Holland is the country with the greatest cycling culture in the world, motivated of course, by its flat landscapes, the perfectly marked and ordered bicycle lanes and the rules that govern especially for cyclists.

Did you know that, at the right of way, there are bicycles first; second, pedestrians, and lastly, cars?

So, in a nutshell, almost as an obligation (of course for anyone who has the means to do so), traveling to Holland implies renting a bicycle, at least for a day, and travel some of the most important routes through the country of tulips. Since most travelers choose their capital as their first city, we are going to see which are the best routes to do in Amsterdam by bicycle and of course, its surroundings.

Amsterdam by bike: routes around the city and its surroundings

Renting a bicycle in Amsterdam is something completely simple, due to the wide range of shops where it is possible to rent them, of different sizes, styles (for a ride or more for adventure), for adults and for kids. Indeed, it is very interesting that if you want to know and optimize your stay in the city, you find out about the best routes to explore Amsterdam.

The first thing that we are going to analyze is the classic route through Amsterdam : its streets, its canals and everything picturesque that makes this city “fairy tale”.

Bicycles in Amsterdam can be rented for a day or several although, generally, the most convenient thing is to do it for at least 24 hours and increase as the itineraries and places are decided by travel. If you are only going to visit the city by bicycle, a “walk” will be enough and, if you prefer to also visit the surroundings of the city, it would be advisable to change to a bicycle with gears (or gears).

Amsterdam is a relatively small city to visit, if done on foot, many choose to stay for about 2 days to visit the most relevant, so, by bicycle, it is possible to visit the most touristy places in a short time (although we will always recommend staying as long as possible in each city). The must-see places to visit in Amsterdam by bike are:

Amsterdam maps perfectly highlight the streets which, for the most part, are suitable for cyclists, although be careful, there are some (with signs that indicate them) that only pedestrians can access it.

Let’s go, take the rental bike, buy the train ticket to Koog an den Zaan (for one and one for the bike) and travel the routes around Amsterdam by bicycle, an experience that more one seeks to do at least once in life.

Surrounded by cheese factories, clogs and full of windmills, one of the most recommended routes is the area around Zaanse Schans, located 25 minutes by train from Amsterdam.

The route is based mainly on the small town (with many tourists) of Zaanse Schans, although it is advisable to continue along the routes that start from the town and descend to take photos of bridges, mills and the town of Rijn, a site that locals visit, so the climate is much calmer.

Less than an hour by train from Amsterdam, it is possible to arrive at the Utrechtse Heuvelrug National Park (one of those names to have written down on paper when asking).

The National Park is located in the center of Holland and is one of the few places where it is possible to pedal in a wooded area full of hills, quicksand and meadows, an ideal natural space to connect with nature and enjoy the landscape.

4. To Marken Island, a great cycling plan a few kilometers from Amsterdam

A 20-kilometer route from Amsterdam shows cyclists part of the history and nature of Holland, in one place. Marken Island is located to the north of the city, linked to the peninsula by a dam built in 1957 where it is possible to cross to the small fishing village of Marken, with its own dialect and its picturesque wooden houses.

The route is charming, combining nature and tranquility of its inhabitants in one place, with a route that can be done in a circular way, starting from the town, passing through the lighthouse and touring the narrow streets that make it up.

5. The Amsterdam Forest, a super local place to visit

Less than 35 minutes by bicycle (since we are going to pedal) is one of the favorite places for residents of the city, due to the nature that It represents and due to its proximity to the capital city, a highly recommended route starting from Amsterdam by bicycle.

Being one of the largest urban parks in all of Europe (even 3 times bigger than Central Park in New York), the Amsterdamse Bos (Amsterdam Forest ) has 137 kilometers of footpaths and 51 kilometers of bicycle lanes, where in addition to pedaling in the middle of nature, it is possible to do various activities such as wildlife watching and native flora, enjoy rowing channels and competitions, practice sports such as hockey, tennis or soccer, let the children enjoy the playgrounds special for them and even eat a restaurant when hunger begins to increase.

Almost an hour by bike from Amsterdam, is one of the best places to see tulips in Holland: Keukenhof and its wonderful and colorful fields of these flowers so characteristic of the country.

Despite being a closed garden, in which it is necessary to pay an entrance fee to enter, the surroundings of Keukenhof are ideal for cycling or even reaching the access in two wheels.

In addition to Keukenhof, there are many other places in Holland where it is possible to admire tulips in flowering season. Don’t miss our top 5 of the best places to see tulips in Holland.

7. Along the River Vecht: a journey through the history of Holland

The route between Weesp and Utrecht is one of the best options for cycling around Amsterdam, even though the first city is just under an hour away.

For travelers who are already in the wave of bicycles, surely they will look for those more remote places to visit in Holland or at least avoid the classic tour of the capital. A great option to do on two wheels, is the route that borders the River Vecht, among the cities that we told you about before, with a total of 35 kilometers in length, we talked one hour one way and one hour back.

This journey, in addition to skirting nature, allows travelers to learn part of the country’s history, passing farms, old merchant mansions and even visiting the Utrecht canal, a postcard worth photographing.

8. Cycle around Amsterdam like a Dutchman through Lange Linschoten

Called by many the “green heart of Holland”, one of the main choices of the Dutch, especially those who live in Amsterdam, is to walk the path of the Lange Linschoten stream between the cities of Woerden and Gouda, the former located less than 40 minutes by train from the country’s capital.

The route is about 20 kilometers, which is considered a long but not complicated journey, especially for those who are just trying this matter of the bicycle in Holland but are looking for nature and get away from urban pollution a bit.

The landscape is beautiful (super Dutch) crossing farms and groves and, as if to further motivate hungry travelers, the possibility of visiting the Gouda cheese factories ( the real one) in the small medieval town, an incredible place to visit.