Every city keeps its secrets and curiosities and these may not be so noticeable with the naked eye. And the best known, most visited and photographed in South America is no exception: Rio de Janeiro.

Are you ready to discover how much you know about the Marvelous City?

1. The design of the calçadão of Copacabana and Ipanema is different

One of the most unmistakable and unforgettable postcards of the wonderful city are the designs that some borders (calçadão) have. The one most remembered by all -and that is in all the carioca souvenirs there have been and for having- is the one that has the design of waves parallel to the sea.

That corresponds to Copacabana, it was redesigned in 1970 by Burle-Max (without knowing that it would become an international postcard) and it was the first to be made with stones brought from Portugal. In fact, the same design is found in Lisbon, specifically in Praça do Rossio.

After this first design, the idea of ​​decorating the borders with striking designs expanded and that is how Ipanema, among others, emerged. The calçadão, 4km long, in the neighborhood where the song “Garota de Ipanema” was born, has geometric and rounded shapes.

Did you notice the difference?

2. The name Rio de Janeiro refers to a river that doesn’t really exist

Rio was discovered on January 1, 1502 by a Portuguese expedition commanded by Gaspar de Lemos. Upon arriving at what is now known as Guanabara Bay, he believed that he had found the mouth of a great river and decided to name it “Rio de Janeiro” (Rio de Enero in Spanish).

3. It was the capital of a European country

Due to the invasion of Napoleon Bonaparte’s troops in Portuguese lands, the colony had to make the decision to flee to Brazil, also causing the transfer of the entire court together with the king. So then, during the period from 1807 to 1822, Rio de Janeiro became the capital of Portugal, being the only one that was not in Europe.

4. Organize the most recognized parties in the world

Carnaval and Réveillon fight for the first place for which is the most popular event in Rio. Based on my experience I could say that both. Réveillon is the end of the year event where everyone celebrates on the mythical Copacabana beach with live music and approximately 10 minutes of fireworks.

Carnival, on the other hand, is not lived only on the weekend but begins several months before with the blocos da rua (street parties). People are produced in the best costumes and are ready to have the best possible time and at any time. Even if there is a block at 8AM. You know, carnival is sacred. In fact, it is said that the year in Rio really begins after Carnival.

5. The main tourist attraction of the city is affected by lightning during the year

Due to its location and climatic conditions, Brazil is one of the countries that receives the most rays in the world. This is not indifferent to the iconic wonder of the world located in that country, more precisely in Rio de Janeiro.

The 38 m high monument that is located on the Cerro del Corcovado (700 m) has a strong lightning rod system but when storms are very strong, they can also fall in the. The last time this happened, it was in January 2014 when a lightning bolt caught at the right time, destroyed two fingers of his right hand and a plaque to the Christ.

6. Rock in Rio is not always made in Rio de Janeiro

Although its name says otherwise, Rock in Rio had seven editions in Rio de Janeiro, eight in Lisbon (Portugal), three in Madrid (Spain) and one in Las Vegas (USA).

7. Do you really know who the Cariocas are?

8. The center is not the main tourist area of ​​the city

How many times do we think that the most tourist area of a new city is the center and is it the best to stay?

Although in the center of Rio de Janeiro we can find great postcards such as the Arcos de Lapa and the Escalera de Selarón (along with other jewels such as the Municipal Theater), the southern area takes the prize for the most touristy part. Here are the beaches of Copacabana and Ipanema, the best known in the world and this is the best area to stay. 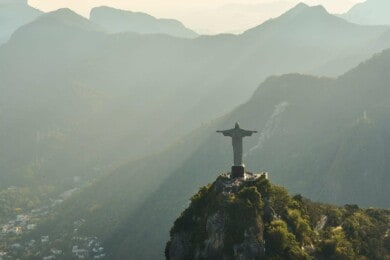