Colombia is a country with incredible places that make more than one person sigh and its culture is not far behind. A good way to get to know it can be through your traditions, or your gastronomy, or also its art. But there is something that offers a different point of view of the places and their citizens, where you can see his ingenuity, humor, own words, and they are insults. Do you know rudeness from Colombia?

It seems to us that a different way of discovering the culture of Colombia is knowing some Colombian insults, why not? Of course, this is not about going through life offending people, but knowing words from other places is always fun and adds to our vocabulary, and Colombian rudeness is no exception.

So, the next time you go to this Latin American country or are consuming something that is related to its culture and you hear Colombian words to insult or funny Colombian insults, you will know exactly what they are talking about.

11 Colombian insults you have to know

This is one of the Colombian words to insult that has more than one meaning. In the rest of the world, and in Colombia too, of course, gonorrhea is a sexually transmitted disease, but in this country it is also used as rude. is used to tell someone that they have had or are having a very bad or unpleasant attitude.

Lamp is a word known to Spanish-speaking people, and it refers to a utensil that is used to give light or to hold artificial lights. However, in the world of Colombian rudeness or Colombian words that are used to insult it has a different meaning. Here, is used to refer to a person who wants to show himself a lot, who pretends to be much more than he is. A synonym for lamp could be believed.

Of the Colombian words to insult that we have named so far, perhaps this word is not so familiar. It is used to refer to people who are a bit naive, who can be easily fooled or convinced of something without much effort.

A synonym for this word that is part of the funny Colombian insults could be “sonso”.

This is another of the words that is part of the rudeness of Colombia that may not be so familiar to all Spanish-speaking people. In fact, like atulampado, it is a word that is not part of the dictionary of the Royal Spanish Academy. But what does it mean?

Líchigo is one of the Colombian words to insult and is used to describe a person who is stingy, who every time money is raised to build a common fund and buy something, he is sneaky and try not to pay, although it is likely that in the long run you will end up adding your contribution.

In the first instance, gorrero does not seem to be part of the Colombian words to insult, but rather it seems to refer to someone who makes or sells caps or hats. And although it is possible, in this case it has another meaning. A “gorrero”, in Colombia, is a person who goes one step further than the “lichigo”. This means that neither of them likes to have to drop money but in the case of the hat, try to avoid at all costs having to collaborate.

In general terms, you could say that it is someone who lives off other people. In addition, it is not something that we tell you here. Unlike other Colombian rudeness or Colombian words to insult, this one is part of the RAE dictionary and defines it as that, “person who lives or eats at someone else’s expense”.

Yes, the toad is an animal that is known around the planet but within the Colombian words to insult it has another meaning. This word is used to refer to people who tell on their friends or people in general. A “sapo” is a snitch, which in other parts of Latin America is also known as a “buchón”.

So now you know, if someone from Colombia tells you that you are a “toad” it is not a good sign.

Although this word is not exclusive to Colombia, it is one of the most classic Colombian rudeness. Typically used to refer to someone who does not realize that they are taking advantage of opportunities presented to them or that everyone else, or most, takes advantage of.

This is one of the funny Colombian insults that is also often used in other areas of Latin America.

Zunga is a word that may sound familiar, since both in Brazilian Portuguese and in some regions where they speak Spanish it is used to refer to male thongs and that is why it may seem one of the funny Colombian insults.

This has two different meanings. On the one hand, a “zunga” person is one who is dirty, who has an odor that is not pleasant. On the other hand, “zunga” is said to women who enjoy their sexuality. A few years ago, it was taken as one of the Colombian words to insult, as if it were something bad for a woman to openly enjoy of their sexuality. Lately, that’s changing, and what used to be an insult is now being re-signified by a group.

This is not a common word in other places and it is another one that is not part of the RAE dictionary either. In this case, it is one of the Colombian rudeness that is used to refer to people who are of “bad habits”.

Depending on where you are from, it may be that this word makes you think of a sauce or directly a typical food dish of cold winter climates. However, in this country it can also be used as a Colombian insult. In this region, “guiso” is used to refer to people who are rude or have poor manners.

On occasion, this Colombian word for insulting can also be used as a compliment, it all depends on the context.

In many places a “Boleta” refers to a piece of paper that they give you, as if it were a receipt, as proof of paying a certain amount of money, but here it is something different. We could say that it is one of the funny Colombian insults, and is used to refer to people who tend to be very eccentric to dress, combining bright colors. It can also be used for when they act conspicuous.

From now on, if you hear any of these Colombian words to insult you will already know what they mean. Also, if you wanted to know rudeness from other places, here you can check 33 Argentine insults.

Do you know any other rude words from Colombia to add to the list?

Find out more of
Colombia
More of Colombia

The 10 best Beaches to enjoy near Cartagena, Colombia

10 places near Bogotá that every adventurous traveler should know 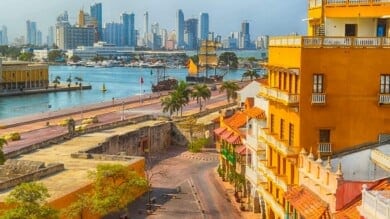 What to do in Cartagena? The charming “fairytale” city of Colombia