The 12 best Moscow Metro stations: what they are and how to visit them 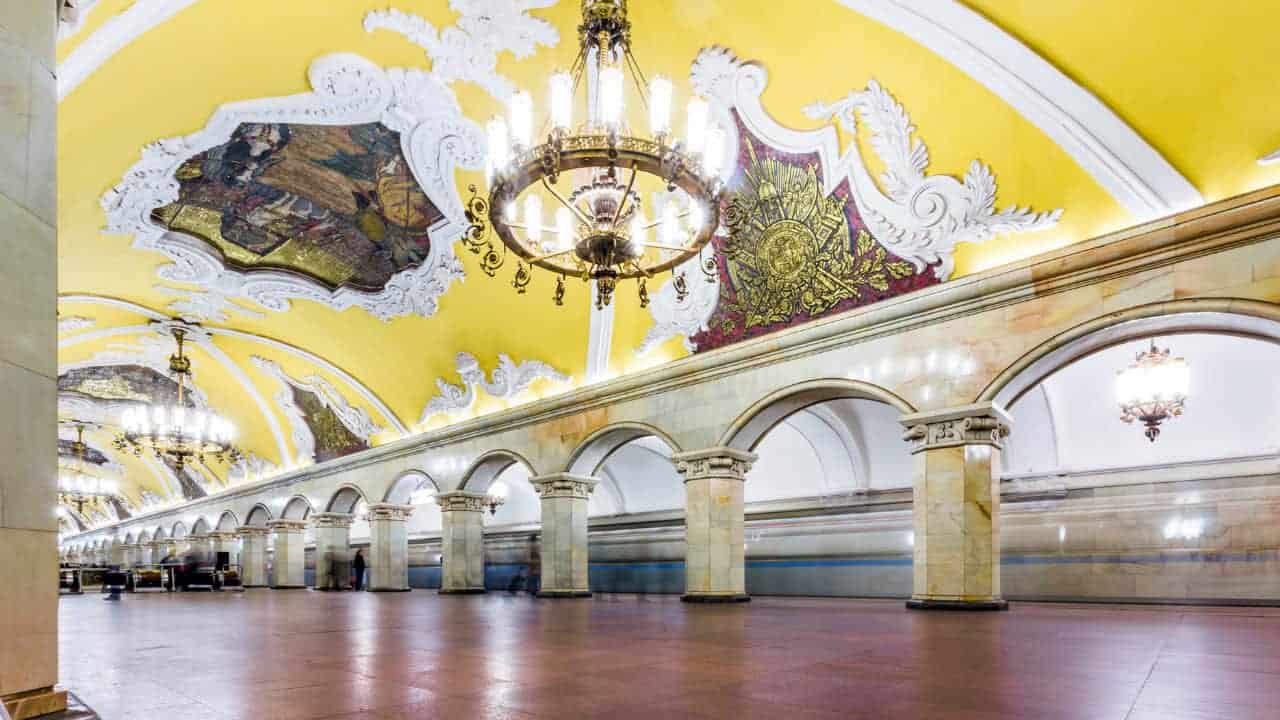 As we anticipated at the beginning, Moscow metro stations are much more than just a simple site that you go to moving from one place to another, they are a tourist attraction in themselves and, allocating a few hours to visit them, is the best recommendation at least during one of the travel days.

In addition to the importance of the hundreds of kilometers of tracks and stations (being the third largest subway line in the world, after New York and London), of the more than 199 stations and the history of how was the arduous construction to see them completed, the art of the Moscow metro stations can be seen reflected just by walking a few meters.

The art of the subway stations of the Russian capital is described as “Socialist Realism”, with Lenin almost as the protagonist of hundreds of paintings, scenes of war or life from the countryside around the city, being a perfect museum of Russian culture and the history that visiting the country entails.

How to visit the best Moscow Metro stations

Moscow is a very big city and using the metro to get around makes it the best way to make the most of your time and, incidentally, enjoy the “arrival” of the metro from another way, enjoying the art and the underground museum.

The best way to go around and visit the different Metro stations in Moscow is as you use the metro, paying for the ticket (using the Troika card for many trips, as most do of the Muscovites, private tickets or combining different means of transport) and in this way having the waiting time more than taken advantage of (if the metro is used to move, we can consider visiting the metro stations of the city as one of the free things to do in Moscow, right?).

Another way to visit the best metro stations is through thematic tours dedicated purely and exclusively to the stations . There are different agencies available to do them and many of them have the methodology of being “free” (where you only pay a tip to the guide at the end of the tour).

What are the best metro stations in Moscow?

Of course, saying “the best” or the “most beautiful” Moscow metro stations may sound somewhat subjective, but in this list we will show you why they are the most chosen by travelers when visiting them.

Most of Moscow’s most visited metro stations are located on the brown line or in the perfect brown circle that surrounds the city center.

1. Komsomolskaya, the most visited metro station

Undoubtedly, it cannot be missing from your list to visit Metro stations in Moscow. Possibly because of its location, popularity, or simply because it seems that you are entering a palace instead of a subway station, the Komsomolskaya station (unpronounceable for those of us who do not like to speak Russian) is one of the most recommended by travelers.

The first station was built in 1935, with some new additions in 1952 but without losing the charm that leaves travelers speechless: the magnificent baroque-style yellow roof that makes you lose consciousness of being in a subway station and feel inside this palace that we told you about before. Towards the end, it is possible to see a bust of Lenin, part of the history of Russia present in the stations, which we mentioned at the beginning.

2. Belorusskaya, a journey through time through the Moscow station

Like other subway stations, Belorusskaya is one that, if not for the noise of the approaching subway, one can lose track of time and space and feel that they have traveled back in time. This station differs from the previous one, for having white ceilings, very elaborate with 12 mosaics, recounting life in Belarus.

3. Kievskaya, the union of two countries turned into a metro station

If there is someone who can pronounce the stations well or has a memory of which Moscow Metro station to visit, surely the one that comes to mind is Kievskaya. Like all the history embodied in the stations, this one is dedicated to the union between Russia and Ukraine through mosaics and communist symbols such as the hammer and sickle . The 18 mosaics are depicting this part of Russian history.

Of the different colors that the underground vaults of Moscow metro stations have, Novoslobodskaya is one of the most colorful (and we could say that one of the most beautiful stations in Moscow), located on line 5, inaugurated in January 1952. The sensation of walking through this metro station does not resemble a palace but a cathedral, where the mosaics and 32 stained glass windows framed in gold make it a unique way within Moscow.

5. Elektrozavodskaya, light as the main theme

You will surely have no problem seeing each of the details of the subway station that, almost as if it were understood by its name, the entire station is based on lighting.

In Elektrozavodskaya, one of the most beautiful metro stations in Moscow, the entire ceiling is complete with circular lamps located in small vaults, giving a unique feeling and thematizing the station as each of those that make up the Moscow metro, does. Of course, not to lose sight of the lamps and pay attention to the reliefs on the sides, it looks like a museum.

Besides being the deepest station in Moscow, Park Pobedy is the third deepest in the world and one of the most modern of all Moscow metro stations, as it was inaugurated in 2003 with wide corridors and another of the city’s records: 4 escalators, 126 meters long, the longest staircase in the entire city . The floor looks like a large chessboard that, somehow, combines perfectly with the red and white marble columns.

7. Mayakovskaya, one of the best-known metro stations in Moscow

As each station is different and each one has “his own”, Mayakovskaya is not far behind and stands out from the rest, being one of the best metro stations in Moscow, for its most avant-garde style, despite having been built in 1938 but rebuilt in 2007, forming a different design than the rest.

The particularity of this station is that, not only its mosaics and works of art represent part of Russian and Moscow history and culture, but also that, during World War II, served as a bomb shelter, many even claim that it was a place where Stalin took refuge.

8. Ploshchad Revolyutsii, one of the most important Moscow metro stations

In addition to its practically unpronounceable name (not without being Russian born), the Ploshchad Revolyutsii station, located a few meters from Moscow’s Red Square, the most important in the city and one of the most beautiful metro stations in Moscow, it is a station to learn even more, not only the history of the city but also the way of life of its residents .

How? The station is decorated with 76 bronze statues representing the Soviet people, creating a spectacular sensation of visiting a museum (let’s not forget that we are talking about subway stations!)

Fun fact: inside all the statues, there is one of a dog with a somewhat worn nose. Why? Because the locals say that if you touch it, you will get luck.

9. Slavyansky Bulvar, one of the lesser known metro stations

If you are visiting the Moscow metro stations, this must be one of the most curious . Possibly not as traveled by travelers as the previous ones but with green marble walls that definitely surprise those who travel it or simply wait for the arrival of the subway (which takes 60 seconds in peak hours and 90 seconds in hours without so much traffic).

10. Novokuznetskaya, history as a work of art

Let’s talk about ways to go through the history of Russia and let’s talk about one of the best metro stations in Moscow: Novokuznetskaya, almost like a history book embodied in art and mosaics within an underground route.

The theme of its mosaics is: military and Soviet soldiers are depicted during the “Patriotic War” or World War II. According to some, the white marbles that also decorate the station come from the Cathedral of Christ the Savior, located near the Kremlin, destroyed by Stalin in 1931 and rebuilt years later. afternoon ( one of the essential places to visit in Moscow ).

11. Paveletskaya, the presence of Russian agriculture in Moscow metro stations

This station, inaugurated in 1950, also tells the history of the city’s surroundings and, especially, agriculture present in the country, since part, from this same station, the railways in the direction of the Volga region. The best of the entire station, in addition to the marbles of different colors, is the mosaic located at the top of the escalator, representing Moscow’s Red Square, making the list as one of the best metro stations in Moscow.

Last on our tour but definitely one of the best Moscow metro stations to visit is Tagánskaya which, unlike the other colors, blue stands out from the rest of artistic works.

This station, belonging to line 5 of the Moscow metro, was inaugurated in 1950 with mosaics representing the soldiers and families of the Soviet army although, the entire station is representing to statues with a military theme .

Although it is still curious to think about it, the Moscow metro stations are part of the attractions to do in the city and at least one of them should be visited by the travelers who visit it. Art, history, indelible traces of a past that are captured on the walls in the most particular ways, making each of them resemble the rooms of an underground museum.

Find out more of
Europe
More of Europe