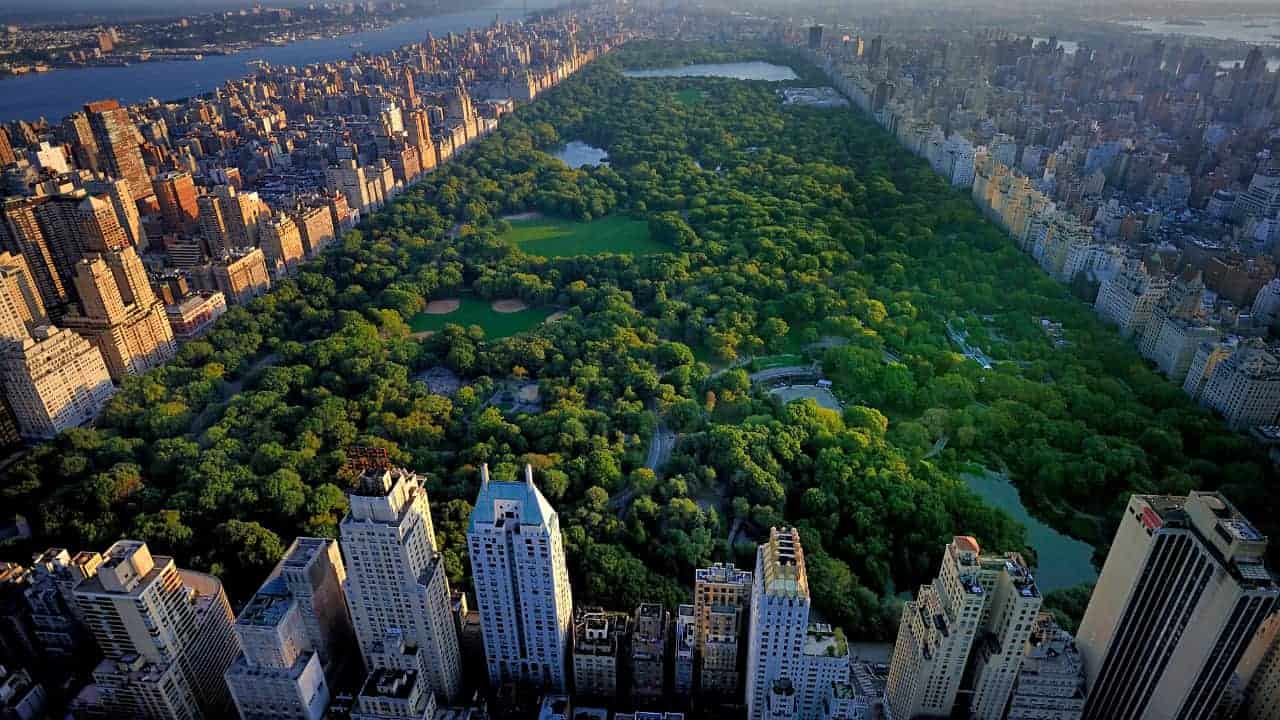 New York’s Central Park is the most important park in the city, one of the essential places to do in the Big Apple and one of the places that, the snow, the summer heat or any season of the year make it special, attracting thousands of tourists in each of its sectors. It is indisputable that going to New York and not touring Central Park is practically an unthinkable fact, that is why, in this post, we will help you with everything you need to know to tour Central Park in the best way: how to get there, what to do, how to get around it, and some travel tips, ideal for a first visit. Are you ready?

What is Central Park in New York?

As we told you at the beginning, Central Park is the largest and most important park in New York which, with its almost 3.5 square kilometers, makes it one of the urban parks largest and most famous in the world which, like London’s Hyde Park, is one of the key places to visit in the city (planning a trip to London? Don’t miss this guide to visit Hyde Park)

When a movie is filmed in New York, there is no chance that it does not include a super aerial shot of the dimensions of Central Park, in the form of an oasis that is generated, surrounded by the most important buildings. important throughout the city.

Did you know that Central Park is an artificial park? Of course this does not mean that the trees are fake, far from it, but that their construction was defined because of wanting to improve the quality of life of the residents of the “Big Apple” and of the need for a lung in the middle of a big city like New York. Construction of Central Park began in 1857 and was completed 20 years later.

Did you know that there are dozens of movies that were filmed in Central Park? Some of the best known are: 27 dresses, Enchanted, Breakfast at Tiffany’s, Girlfriend War, Sex and the City, When Harry Met Sally and many more… (it’s time to see them).

How to get to Central Park in New York?

Of course, with so many kilometers in length and, being literally in the middle of the city, the ways to get to Central Park are hundreds, but here we tell you the most used ones:

How much does it cost to go to Central Park? The park is free to enter, although some attractions, guided tours or ways of exploring it They have a separate cost, but to enter and walk, you do not have to pay any dollar. One of the things to do for free in New York? Sure! Central Park hours are from 6 a.m. to 1 a.m., every day of the year.

How to get around Central Park?

Central Park is a giant park and the number of hours that are allocated or the number of attractions that you want to see will depend on the itinerary of each traveler. For those short on time, the favorite space and the most visited place in Central Park is its southern part, starting at 59th Street (north). Touring Central Park from “end to end” is not impossible but there are different ways to do it:

Like your arrival, is one of the most used ways to organize your own time and the attractions that you prefer to do. Of course, being such a large park, you may not be able to do many sites in the same day but yes, at least, visit most of them that are located in the middle to the south.

If someone asks us, what is the best way to get around Central Park? So the answer, undoubtedly (and from my own experience) is by bike. As there are so many internal streets, touring Central Park by bicycle makes it a great option to visit a large part of the attractions and not get so tired of each other. The places where you can rent bicycles are in the surroundings of the park and you can rent bicycles for one person, for two or for families, for a whole day or for a few hours.

A great way to get to know Central Park and avoid the fatigue of walking is to hire a tour in a kind of “mini float” but led by a guide on a bicycle (with a more physical condition how enviable). These tours can be found on 59th Street and at the corners of 5th Avenue and Central Park West (the two adjoining avenues to the east and west).

Exploring Central Park by boat, is it possible?

Although it may seem incredible, touring (part) of Central Park in a small boat is possible. Of course, not all the attractions are visited, but The Lake of the park is very large and has spectacular views (especially if it is visited in autumn, the best time to visit Central Park? Possibly ). The boats are suitable for 4 people and can be rented around the lake, located in the middle of the park, almost at 71th Street.

What do we not recommend to visit Central Park? Floats

Although we do not endorse or agree with horse-drawn carriages, it is indisputable that it is one of the ways some travelers use to get around Central Park. The floats are located to the south of the park, on 59th Street, although, again, carriages in the 21st century should already be prohibited and we do not recommend it at all.

What to do in Central Park?

As we told you before, Central Park is not a simple urban park, but all the attractions inside and around are interesting to visit and discover, during any part of the year and For any occasion. The best thing is to buy food to have a picnic, walk and rest in one of the many green spaces that the park has.

The attractions are many and each one of them tells a story behind that makes it more than interesting. Here we will name you the most important places in Central Park, although of course, each of them deserves a separate chapter.

Traveler information: in addition to the different visitor centers located in various sectors (where you can request an exclusive map of Central Park), the app Central Park (available for IOs) has tips and maps to better locate within the park. In addition, doing click on this link, it is possible to enjoy a tour through Central Park, and there are even options to do a virtual tour of different parts of New York City.

Traveler advice: It is a place of great respect but photos are allowed. If you wait a few minutes, almost every day there is a spontaneous musician singing songs by the artist.

Gapstow Bridge and Bow Bridge: attention instagramers! The Gapstow Bridge is one of the most picturesque little bridge to see in Central Park because, despite having a “rustic” style, it contrasts perfectly with the buildings and skyscrapers that make up the city and that are located as a backdrop. The Bow Bridge we can say that it is one of the most romantic bridges in Central Park and it is another of the unmissable visits to do in the urban park of Manhattan, the photos are incredible! Definitely two must see in Central Park.

Are you traveling as a family? These are the best things to do in Central Park with children

Although many think that traveling with children to New York can be complicated, the reality is that the Big Apple has so many options for different types of travelers that it is impossible to get bored or not find activities to do.

Visiting Central Park is always a great idea, again, regardless of the time of year, but what to do in Central Park with children?

Look for the squirrels of Central Park: despite not being a place, it is one more attraction to do in Central Park with children at any time of the year. Of course, you have to take into account not to feed or disturb them, there are thousands and they are everywhere, so having a photo is not a difficult task.