10 unmissable places to see in Girona in one day 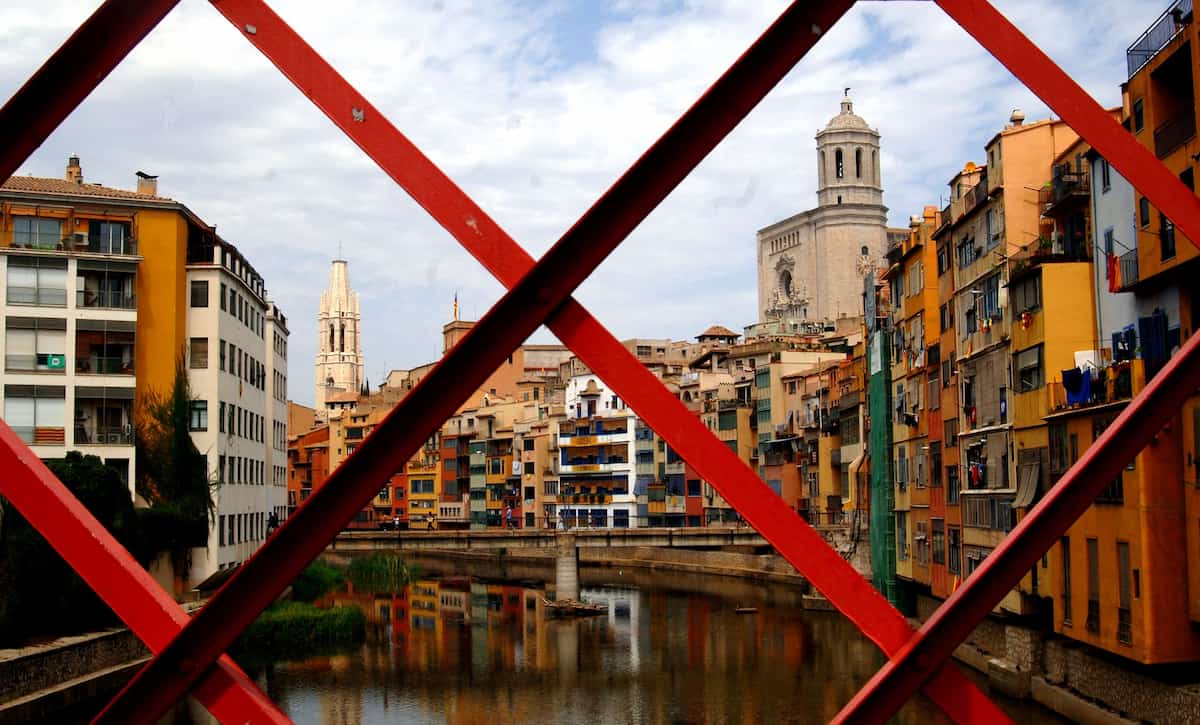 “One of the most beautiful cities in Spain”, is the phrase that is heard the most when talking about Girona, in Catalonia.

A city like few others in Europe, where what you have to see in Girona are its little streets full of stories from medieval times, the place where restaurants with several Michelin stars are erected, revealing the flavors and aromas of the region, the site of one of the best preserved Jewish neighborhoods in Europe and a cathedral that stands out from the rest of the constructions forming a perfect postcard that has been chosen stage for scenes from Game of Thrones. No small thing, right?

Do not miss this post where we will tell you the best things to see in Girona in one day, the key places that you cannot miss on a first trip and the ideal places to visit in 24 hours in the city.

10 places to see in Girona in one day

1. The colorful houses of the Oñar River

One of the most photographed places in Girona -and the postcard that you see in the first instance when looking for the city on the Internet- are the yellow, ocher and pastel red houses that border the Oñar River (can be found written as Río Onyar).

These facades were built during the Middle Ages to protect the houses themselves from the overflows of the river without taking into account that the “Catalan Florence” was being created, as some call it, a picturesque part of the city that adds the charm that everyone loves and the key place to see in Girona in one day.

The colored houses can be admired from the different bridges that cross the river, but one of the must-sees is the Peixateries Velles, an iron bridge built by Gustave Eiffel himself (yes, the of the Parisian tower) in the year 1877.

Girona is one of the best places to visit near Barcelona and most chosen by travelers for being less than 100 kilometers from the great Spanish city.

If we talk about unmissable places to see in Girona, then this is the first place to go. There is no way of not recognizing the Cathedral, since it is possible to see it from anywhere in the city, as it is elevated thanks to its 90 Baroque-style steps, in the center historical, demonstrating its presence and importance.

Girona Cathedral demonstrates its relevance by being one of the most visited buildings in the city, where, in addition to admiring its imposing façade, it is possible to visit its interior (with audio guides available), the nave widest Gothic style in the world and an incredible cloister.

Despite the expulsion of the Jews from Spain in 1492, the community has left its mark (and more than important) in different cities of the country and Girona has not been the exception, especially since they were the years of greatest economic peak in the region.

El Call is located in the historic center of the city, so it is a great option to visit after photographing the cathedral, continue walking along Calle de la Claveria and, of course, get lost among the streets that criss-cross it to feel the essence of the place.

Speaking of essence, did you know that in this part of the city, the movie “el perfume” was filmed? < / blockquote>

4. Stroll through the walled city

Since the 9th century, Girona had defensive city walls, which today are very well preserved, maintaining the style of “time travel” when visiting its streets, especially in the historic center.

The walls of Girona have been declared Asset of Cultural Interest, promoting their visit and preservation and also forming part of the best viewpoints in the city, where it is possible to access and admire panoramic views.

In May, Girona celebrates Temps de flors, a 10-day party, where all the balconies, corners and patios are decorated with floral ensembles.

5. Taste the gastronomy of Girona

A tour of Girona in one day cannot pass by lunch (or dinner), since the gastronomy of Girona is a badge that has been earned and, we can say, one of the must-sees to visit in the city.

Spanish food is delicious, its combination of flavors, aromas and traditional recipes take diners on a culinary journey that is passed down from generation to generation. Of course not, Girona is no exception and tasting its traditional dishes with prawns, history, and a lot of flavor, is one of the best things to see in Girona.

The restaurants are distributed throughout the city, especially in the historical and Jewish quarter, transmitting the culture of Girona in every possible way.

One of the key places to visit in Girona in one day are the Arab baths, located at the foot of the cathedral, in the historic quarter. The Arab baths of Girona were built in 1194, imitating the Muslim baths, today declared a Site of Cultural Interest.

The bathrooms are distributed in different parts : the changing rooms, the place with the most Muslim style and the most beautiful to photograph, the cold room, the warm room, the hot room, the oven and the boiler and all can be visited when entering the sector.

The Old Quarter of Girona has those corners where tourists become even more tourists, there are those picturesque corners where you can photograph everything. One of these postcards of Girona that you cannot miss in a day, around the city is the Pujada de Sant Domènec, a stepped street that culminates in the church of Sant Martí, another of the most beautiful churches to see in Girona.

To continue photographing “hidden” and remote sites of the Catalan city, a great recommendation to see in Girona is to visit the Sant Pere de Galligants Monastery, a Benedictine abbey, located a few meters from the Cathedral. The monastery church was built in 1130, so a visit is a true journey back in time.

It is a small but ideal place to learn more about the history of Girona, your ticket has a value of € 4.50 and is open every day, except Monday.

A few minutes walk from the historic center of Girona (or Gerona as the city is also called) is the green lung where you can rest or spend hot afternoons in the region : Parque de la Dehesa, el largest urban park in Catalonia.

Many of the trees planted in the park are almost 180 years old and form, among themselves, shaded vaults where you can walk and rest.

Moment of: souvenir, souvenir … We will probably find a few people in the world who do not buy a souvenir of the city or the destination they have visited (yes, even backpackers do) and Rambla de la Llibertat Girona is a great place to find them.

This old 13th century market and current shopping street (more than frequented by locals) is a great walk to see in Girona in one day and a great place to finish it by taking a Vermouth or a coffee on its terraces, photographing its patios and dry squares almost hidden and enjoying the eclecticism of architectural styles that are distributed along the street.

Visiting Girona is traveling back in time, it is walking through cobbled streets, stone constructions and balconies as can be seen in any film or series of medieval context, a path towards the past that encourages you to photograph everything, to taste its more traditional dishes, emblems of the city and recognized worldwide, recalling the culture of the region in each flavor, color and aroma.

Find out more of
Spain
More of Spain