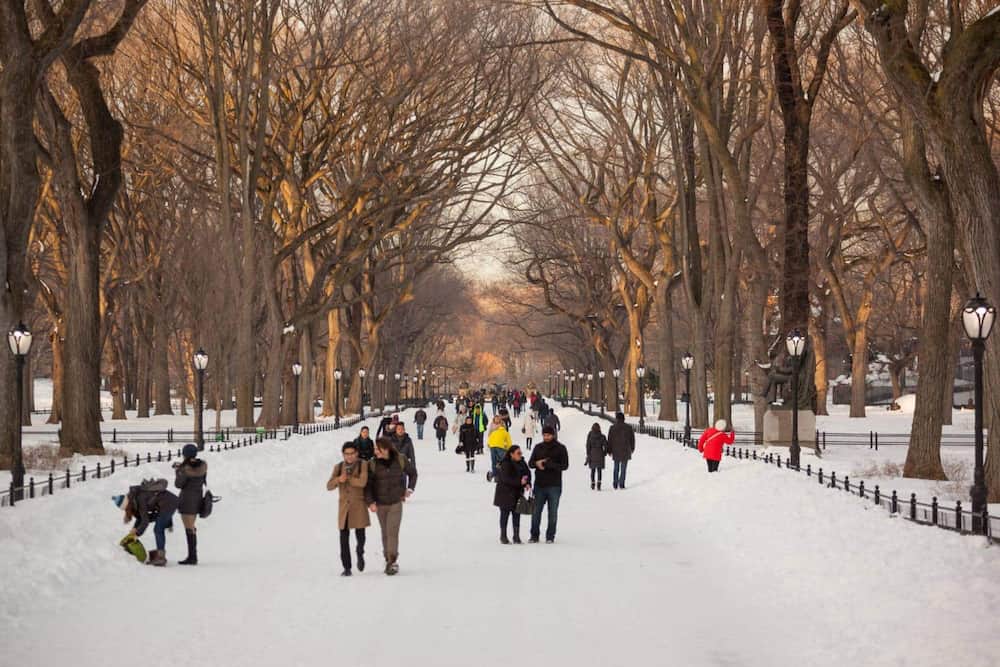 New York in January faces the coldest month of the year, but, white snow covers the city, New Yorkers and the few tourists are wrapped in mega scarves that cover almost all the expensive, the skating rinks survive the cold and the smoke from the fumaroles rises as if from the middle of the street, forming a beautiful postcard that highlights the powers that New York has: a city that is always pleasant to visit.

A city with so much to see that the degrees below zero do not matter, life goes on, day, night and with plenty of shelter. Do not miss this post where we will tell you the best things to do in New York in January, the ideal plans to cope with the cold and why it is a great opportunity to enjoy an almost (and rarely seen ) empty city.

What is the weather in New York in January

January in New York is literally the coldest month of the entire year.

Integrating the winter in New York, in January the temperatures range between -5 and 4 degrees Celsius although, be careful, it is a very humid cold, so the thermal sensation can even be minor.

But don’t despair! There are hundreds of plans to do in New York in winter and January is not a month that goes unnoticed, it is a great month to visit the city and we will also tell you why.

New York in January usually has a relatively stable climate: cold, yes, but snow storms are rare and, if they do happen, visitors are informed so that they can take cover, especially from the cold, for a few hours and then the city resumes its activities. It is commonplace, which is why all New Yorkers are used to bundling up during colder times. So what clothes to wear in New York in January?

What to wear to New York in January

First key point to take into account when traveling to New York in January: clothing. On many occasions we have said that New York is a great city to shop (and it is) but arriving with clothes “not so warm” and having to go to a store is not the best recommendation.

The most advisable thing is to bring the right clothes in your suitcase and enjoy the city from minute one, then there will be time to go through the shops of the city and look for the best discounts ( one of the great reasons to visit New York in January that we will tell you about).

Now, what clothes to take to New York in January is a fundamental part of the trip and the best recommendations are:

A good coat is part of the essentials to travel to New York in January, a fundamental ally to be able to visit the city at any time of day, with snow or wind but to be able to enjoy the wonderful streets of the Big Apple.

What to do in New York in January

A great city, thousands of things to do and a climate that does nothing more than decorate the corners of this big apple that never ceases to amaze. What are the best things to do? to do in New York in January?

1. Ice skating on the most famous rinks

Since winter begins in New York, ice skating rinks open their doors inviting residents and travelers to enjoy the cold from another perspective, much more fun and getting inside local culture (yes, New Yorkers love ice skating).

The most famous skating rinks in New York:

2. Take advantage of the best discounts of the year

January is a great month to visit New York, since, being the coldest month of the year, few are the travelers who dare to visit this city, therefore, it is considered “Low season” and discounts begin to fall like snow, in search of these tourists.

Clearances, discounts, offers and great possibilities of filling your suitcase with whatever you prefer. The large stores of the city are part of their mega sales during January and it is a great opportunity worth taking advantage of.

3. Surprise yourself with the No Pants Subway Ride

Rarely in life have we seen people without pants on the subway, right? At least it is not something that is seen every day and New York emphasizes its versatility with the No Pants Subway Ride, a day in January where, as a tradition, New Yorkers who they join the old custom, they travel by subway without pants. Yes, just like that.

This tradition emerged more than 15 years ago where, 7 friends decided to travel by subway without pants as a joke and, as the years went by, they created an exclusive day in January to do it, adding every year, thousands of residents who join this curious tradition.

4. Visit one of the New York Museums

Resting from the cold somewhere with heating is a great opportunity to cope with the winter in New York and what better idea than to take advantage of that time to visit a museum in the city.

Museums are as varied as the city itself, of contemporary and modern art, history, science, memorials and even celebrities made of wax.

Does it snow in New York in January? Yes (and a lot) and what better postcard to photograph than the magnificent snow-covered Central Park, the squirrels among the trees and the little ones assembling the classic dolls.

The hills that, during May, become a scene for picnics like one of the best things to do in New York in spring, they are dyed white and become slippery slopes where children enjoy the cold.

6. A beer tour of Brooklyn Brewery

The “heated plans” are also a key factor to enjoy the city in winter and a great alternative is to visit the emblem of Brooklyn, tasting a delicious craft beer and knowing its history and production.

Brooklyn Brewery, as its name says, is located in the homonymous neighborhood and the brewery, is practically a historical site within the region. Tours are organized every day inside the brewery with the possibility of tasting each of its types of beers, produced by hand.

Is that possible? Well, visiting New York in January, yes it is. Broadway musicals are recognized worldwide and coveted by travelers visiting the city but, let’s be honest, the ticket prices are not for low cost travelers.

However, in New York in January, the situation changes and generally, during the last week of the month, Broadway Week is presented, a whole week where you can buy 2×1 tickets for the most famous musicals in the world.

8. The best views with a drink in hand, in the rooftops

Photographing the city from above, enjoying a signature drink and not getting cold, seems like a great plan to do in New York in winter and especially in January, so the rooftop bars (or terrace bars) should be in the list.

Many of these rooftops have devised fantastic solutions and alternatives to cope with the cold, either with their glazed interiors or forms of heating.

Rooftops to visit in New York in January:

9. See the brave at the Coney Island Polar Bear Plunge

If visiting Coney Island is one of the best things to do in New York York in summer, visiting it in January is quite an experience. The Coney Island Polar Bear Club is an association of winter swimmers who, since 1903, meet on the shores of Coney Island to literally swim in winter in the icy waters of the Atlantic Ocean.

In addition to doing it privately every Sunday between November and April, there is a day in January that commemorates the Coney Island Polar Bear Plunge, where anyone who wishes can join the club and be part of this frozen experience.

10. The best restaurants at the best prices: NYC Restaurant Week

Discounts on musicals, shops and … restaurants! During a week in January, and since 1992, the best restaurants in New York open their doors at affordable prices < / strong>, generally with fixed values ​​for lunch and dinner to be able to enjoy the best gastronomy at relatively affordable prices.

Generally, the values ​​for lunch are around 22 dollars and for dinner, 46 dollars, although it may vary depending on the restaurant and the past year.

11. Admire the Holiday Train Show in the Botanical Garden

The city in miniature, little trains touring the most diverse scenes in the Big Apple and a great plan to do in New York in January and especially with children.

Located in the Bronx and following a great Christmas tradition (which runs towards the end of January), the Holiday Train Show, the little train of the Botanical Garden takes place more than 30 years ago, traveling through 175 typical New York scenarios such as the Statue of Liberty, the Brooklyn Bridge or the Rockefeller Center created with natural materials such as cinnamon sticks, pineapples and even seeds.

January in New York is the time of basketball, ice hockey and the beginning of the American football season, what better way than to cope with the cold with a heated game, becoming part of the local culture and enjoying classic American traditions in a classic game.

New York Giants or Jets? New York Rangers or New York Islanders? New York Knicks or Brooklyn Nets? Any of the tickets can be obtained on the official pages but, if you are looking for a recommendation, a great alternative is to look at the Madison Square Garden page and enjoy any sporting show present, in the most famous stadium in the city.

Visiting New York in January is a great opportunity to visit a city in the form of a postcard : snow, coats and few tourists walking through its streets but full of activities and places to visit. Definitely a city to visit at any time of the year.