These are 8 things to do in Madrid on any given day, and some are free!

The city of Madrid has an incredible amount of things to do and that is why we decided to make a small selection of some of the options you have, whether you live there or are tourists, but first let’s talk about little of the city itself.

Madrid is the capital city of Spain, one of the most important in all of Europe and scene of innumerable books, series and films known worldwide al, among them La casa de papel, Valeria and #Luimelia, to name a few. It is one of those places where the activities offer never ends, whether you are looking for outdoor activities, touring classic places or visiting museums. What to do in Madrid when there is everything?

The city is reputed to be a home to many; No matter where you come from or for how long you stay, Madrid will probably welcome you with open arms. Taking into account, it is easy to feel at home being there and once at home it can happen that you overlook things to do in Madrid that you would not miss if you did not have them at your fingertips. For this reason, we put together this list of things to do that both tourists and local residents can take advantage of.

What to do in Madrid?

Here we tell you what to do in Madrid, regardless of whether you live there, whether you are visiting and the time of year. The best part? Some of the proposals are free

The Madrid cable car reaches a maximum height of 40 meters, covers a distance of 2,457 and offers some of the best panoramic views of the entire city. It has a total of 80 cabins, each with a capacity of six people and covers the entire journey in 11 minutes.

The route of this cable car begins at the Pintor Rosales walk and ends at the Casa del Campo, in fact it is a fast and sustainable way to get from one place to another. other. In the distance it travels, it passes through places such as Parque del Oeste, the hermitage of San Antonio de la Florida and the Manzanares River, among others.

The timetable in which you can access varies depending on the day, but in Generally speaking, it is open to the public from 12 noon to 9 at night, and admission is around 4 euros.

One of the unmissable things to do in Madrid is to watch the sunset in the Cerro del Tío Pío Park. It is located in the Puente de Vallecas region and is one of the best places in the city to watch the sunset. It has hills of different heights from which you can see incredible landscapes.

In addition, not only are the views incredible, but it is one of the most popular green spaces in the southern region of Madrid, it has spaces to ride a bike, do sports and, of course, the viewpoint in the highest area.

Although pets cannot circulate freely throughout the hill, there is a designated space in the lower part where they can be off leash.

3. Take a picture of yourself at the Puerta de Alcalá

The Puerta de Alcalá is located in the center of the Plaza de la Independencia and dates from the year 1778. It is a arc de triomphe that has style neoclassical and is the first to be built in Europe after the fall of the Roman Empire. Unlike other well-known arches, this one has five openings or arches.

Part of its importance lies in the fact that important streets of the city such as Alcalá, Alfonso XII or Serrano converge there. Formerly it was one of the entrances to Madrid and it has become an important tourist spot. It was designed by the Italian architect Francesco Sabatini, although over time it has undergone several transformations.

Not only is it something that you definitely have to do in Madrid, even if you live there and have it within minutes, but it is a place that you can visit for free and at any time. Maybe the photo is just the excuse you needed ????

The name sounds strong and it is that the old slaughterhouse of the city used to be there, but today it is a cultural center that has free exhibitions, markets and activities of all kinds. Although the facilities are From the beginning of the 20th century, in 2007 they were used again to become a space where exhibitions, plays, festivals, live music, cinema, conferences, workshops and more are held. If we think about things to do in Madrid, going through there is an excellent plan.

The Slaughterhouse is presented as a space that seeks to promote inclusion and diversity. The spaces that are outdoors can be signed for free, while the Works that are presented have their corresponding entry, and also offers guided tours.

It looks like one more plaque but it really is a space in the city that is worth knowing and that is why we include it in this list of things to do in Madrid. It is located in the Puerta del Sol and that is why it is not uncommon to see several people there looking down. Its importance lies in the fact that it marks the origin of six national routes known as “radial roads”.

From here they leave for Catalonia, the Basque Country, Valencia, Andalusia, Extremadura and Galicia.

The plate occupies the place of a large tile, so you will be able to distinguish it without problem, since it measures about 60 centimeters by 80. It was placed in 1950 and although it marks the starting point from where the six national routes, it does not constitute the center of the city. In its design you can see the silhouette of Spain with the six routes, two shields and the writing “KM. 0”

6. Buy at least one thing at El Rastro

El Rastro is the oldest market in the city of Madrid and it is probably the most famous as well, so if we talk about things to do in Madrid, you cannot miss buying at least one small item in This site is about five centuries old.

This site is open to the public mainly on Sundays and holidays and you can find all kinds of articles: toys, handicrafts, second-hand clothes, footwear, vintage articles, everything. Although it varies, in a typical year it has a maximum of 3,500 stalls that are located around in the area of ​​the Plaza de Cascorro, in the neighborhood of La Latina.

7. Play in the Museum of Illusions

The Museum of Illusions or, as it is known internationally, Museum of Illusions is an institution that has headquarters in more than 20 cities around the world and, for Of course, one of them is Madrid. It is a place that, as its name suggests, has an innumerable amount of optical illusions that amaze those who decide to interact with them.

To play there is no age and less in a space on this. While some of the illusions that are presented are quite well known, there are others that are completely original. Some of the areas that can be visited are the Upside Down Room and the Infinite Room, where both the laws of gravity and those of proportions are put to the test.

The idea of ​​this place, unlike other museums, is that you interact and experience as much as possible with everything they have to offer and, a plus that adds up, you can take pictures of everything. The only bad thing? is that it is not part of the spaces that you can enjoy for free, but to be able to enjoy everything it has you must buy a ticket.

In some places in Argentina, the place where you can buy chicken and derivatives is known as “pollería”. However, in the case of Madrid and, particularly, in the Chueca neighborhood, it refers to a place where you can buy different sweets, although it is also the center that its stores are located in several other cities of Spain.

Known as pollofres, the sweets sold in L a Pollería are waffles that are shaped like a penis and are accompanied by different toppings. The concept of this place, according to themselves, is to make a difference “in the confectionery sector with a spicy product accompanied by a unique experience”. In addition, in summer they have incorporated the chicken, which are ice creams that are also made with a phallic mold.

The Coñería, meanwhile, is by the same creators and contains the same concept but their products are called coñofres. In this case, the sweet takes the form of a vulva and it also comes filled with different options and you can choose different toppings.

These are just some of the things to do in ​​Madrid and most of them you can only enjoy being there. It is a city with an incredible offer from the cultural, artistic, architectural and historical point of view, and with so many things to do, it is possible that little things pass us by. Having said that, we hope that our list will accompany you to discover new places in Madrid that can make your day a little different.

Of course, as always, if you have more sites of this style that you want to tell us, you can tell us in the comments ????

Find out more of
Madrid
More of Madrid 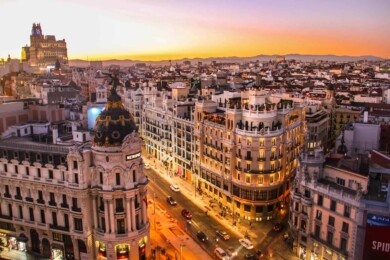