Swimming with Orcas in the wild: know what this experience is like in Norway 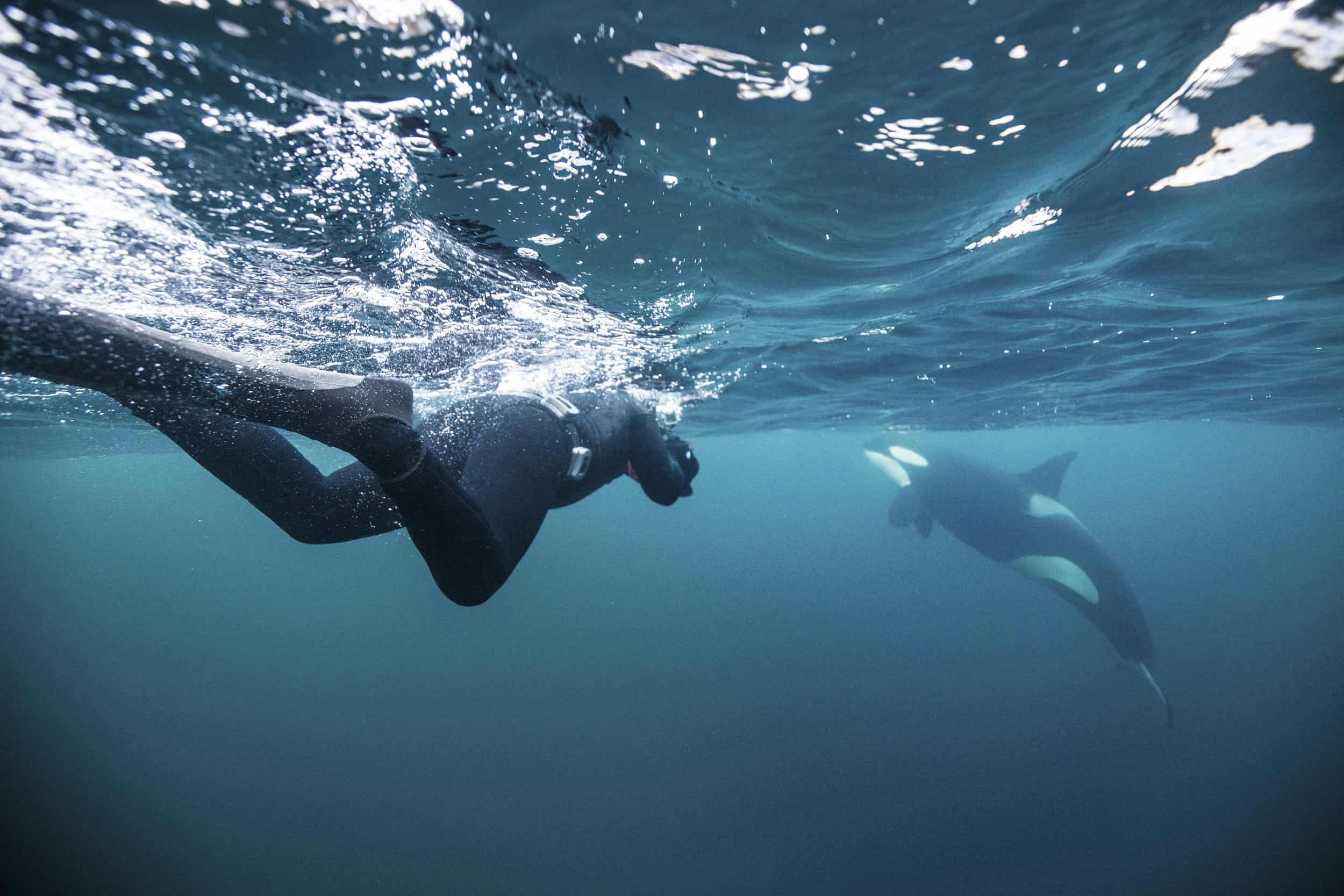 We live in a world where unfortunately there are still places of entertainment at the expense of the freedom of animals (or even of his life). Luckily these zoos or theme parks where visitors pay to see, take a picture or ride animals are less and less frequented by visitors. Even in many cases its “purpose” or way of offering shows and activities is changing thanks to the tourists’ conscience who choose to be responsible in choosing their activities.

There is something that is real: the amazement at the beauty of animals will continue to surprise us forever. The feeling of having them close and being able to see them in freedom is really unique, therefore the desire to be able to experience something like this will always be latent.

There are many places where you can make a non-invasive observation and contemplation activity, and even in some cases interact with animals, always in a careful and responsible way.

At sea, this is more difficult, although it is possible. For example, in Argentine Patagonia you can have an excursion of I swim with sea lions, and in many destinations around the world, if you have a bit of luck, suddenly you can swim with dolphins in the wild or natural habitat.

Now, swimming with orcas and whales is something more complicated or very difficult for several reasons: they are larger animals, it is not so easy to predict where they will be (especially orcas), and there are You have to know well the behavior of these mammals and cetaceans to understand what can and cannot be done.

Well, there is a place in Norway called Seglvik, located in the extreme north of the country, within the Arctic Circle where you can take an excursion in which not only can killer whales and whales be observed from the boat, but you can enter the sea and swim near them.

Obviously orcas and whales visit many other places in the world as they migrate constantly, but they only arrive here in large groups (so it is almost certain to find them at one time of the year) and only here it is legal to carry out this activity. Clearly through authorized companies.

Valhala Orca Expedition is one of the companies that carries out this excursion and we take the opportunity to interview them and learn more about this unique experience in the world.

We speak with Julie and Rodolphe, French who travel and spend most of their time in Norway for 8 years. They both live on a peninsula only accessible by boat, called Seglvik, in the Kvaenangen fjord, north of Tromso.

Observation outings and swimming with killer whales take place only during the winter, when the herring breed in the fjord.

How would you describe this experience?

Although we are in the Arctic, due to the Gulf Stream, the water temperature is between 4 and 7 degrees (not so cold let’s say). Before heading out to sea, all passengers put on a 10mm wetsuit, which works better than a dry suit (for mobility) and maintains body temperature.

Conditions can be tough: daylight, weather, waves, but the moment you jump into the water and have an interaction with a killer whale, time stands still and that becomes a memory for a lifetime.

When, how and who discovered that diving with killer whales (and tourists) was possible …

Years ago we were planning a trip to the shores of Canada to see killer whales during the summer. As we work in the boating industry, our peak season was summer, so we could only take a break during the winter.
We are both passionate about orcas trying to find a place to see them in the wild and that’s when Norway appeared!
Our first experience of diving with orcas was in Andenes, further south than where we are now and, of course, it drove us crazy.

For several seasons we returned to Norway to work for a company that offered whale watching and snorkeling with orcas. Rodolphe was a patron and I was helping.

That’s how after a while, we decided to buy our first boat, a 7.50m milpro zodiac, called Valhalla and we opened our company. We wanted to have small groups of maximum 8 on the boats and share our passion in a family / friendly way.

Last year we acquired a second milpro zodiac named Valfreya, but the concept of working with small groups remains the same.

The people of Seglvik welcomed us very well the first season and we also wanted to share their lifestyle, culture and history with our guests. We hire a local Sami chef and propose local food such as wild meat (reindeer or elk) and fresh fish from the fjord.

Each guest has their own room in the typical Norwegian house and we have our meals all together in a common house facing the sea. Sometimes we see the killer whales from the living room window!

How is the interaction with the killer whales?

When the captain tells you to get ready and you have a good chance of seeing them underwater, the excitement and adrenaline take a new level. Suddenly, the skipper tells you “¡¡ jump! ” and there is no time to think more, the time has come.

3 different interactions can be possible:

Lower Interaction : Killer whales pass by, boat runs parallel to group, passengers jump into the water and just watch as killer whales pass, probably with little interest. < br> Medium Interaction – Killer whales feed on a bait ball and you can watch them hunt and get really close. They may approach you quickly with almost no detection, but their main focus is on herring.
Increased interaction : Many times after feeding, they are calm and willing to socialize with each other. they and probably during this time if a diver is nearby they will also interact with him.

Many times it happens, for example, that mothers come and show their young or juveniles in front of the diver or, sometimes, in a special moment, they even brought seaweed, shells or some jellyfish to the diver, as a game or complicity.

The world of silence becomes a world with magical sounds of socialization, clicks … it is something unforgettable.

Correct behavior towards these animals is the company’s norm: the boat sails in a special way so as not to disturb the killer whales and we ask the divers not to splash, not be noisy, not swim directly on top them or touch them as they invite us into their wild world.

We let the killer whales come to the divers if they wish and obviously we prohibit the chase. It has to happen naturally.

When are the best seasons for the orca diving tour?

From mid-December to early January, the days are shorter at sea even though we have light, the sun no longer rises, but it is when we have more killer whales in the area. And we assure you that the colors of the sky are incredible.

Diving experience is not required to carry out the activity, but good health and physical conditions are required for those who wish to do so. They must know how to swim even though our wet suits are very buoyant.

How much time in advance is necessary to book, how long does it take and how much does it cost?

The sooner the better. Reservations are usually made well in advance since we only have 16 places available with 2 boats.

We propose an all-inclusive package (transportation excluded) for a week (7 tours and 7 nights) from Friday to Friday for the price of € 3300 per person, or 4 tours and 4 nights at € 1920 per person.

The package also includes a typical wooden sauna, an outdoor Jacuzzi and if the weather conditions are good, enjoy the Northern Lights !

Sometimes we organize meals or get together to drink in a typical Sami Laavu shop. It is a magical environment, even if we are lucky we can see reindeer on the island.

I suppose you’ve seen so many incredible things watching whales and killer whales, but what are the specials that you always remember?

Our catchphrase is, the best day for sure will be tomorrow. Every day is magical and different. When we are at sea, the adrenaline is unique.

For me, one of the special moments was when a young female slowly swam towards the boat and began to vocalize from the surface a couple of meters from us. with his calf.

For Rodolphe it was the first time he was in the water when a mother and a calf came to see him showing his belly and turning slowly towards him.

How is the regulation in Norway on this activity?

For now, there is no talk of snorkeling, all the rules that apply are international commercial maritime laws and some, since last year, related to the safe distances of all herring fishing vessels.

Do you also work or help conservation and research groups?

We work surveying groups of Norwegian killer whales and we help Eve Jourdain, a marine biologist and director of an association in charge of the study of cetaceans, to identify orcas and take samples of stranded marine animals that we found.

Find out more of
Norway
More of Norway