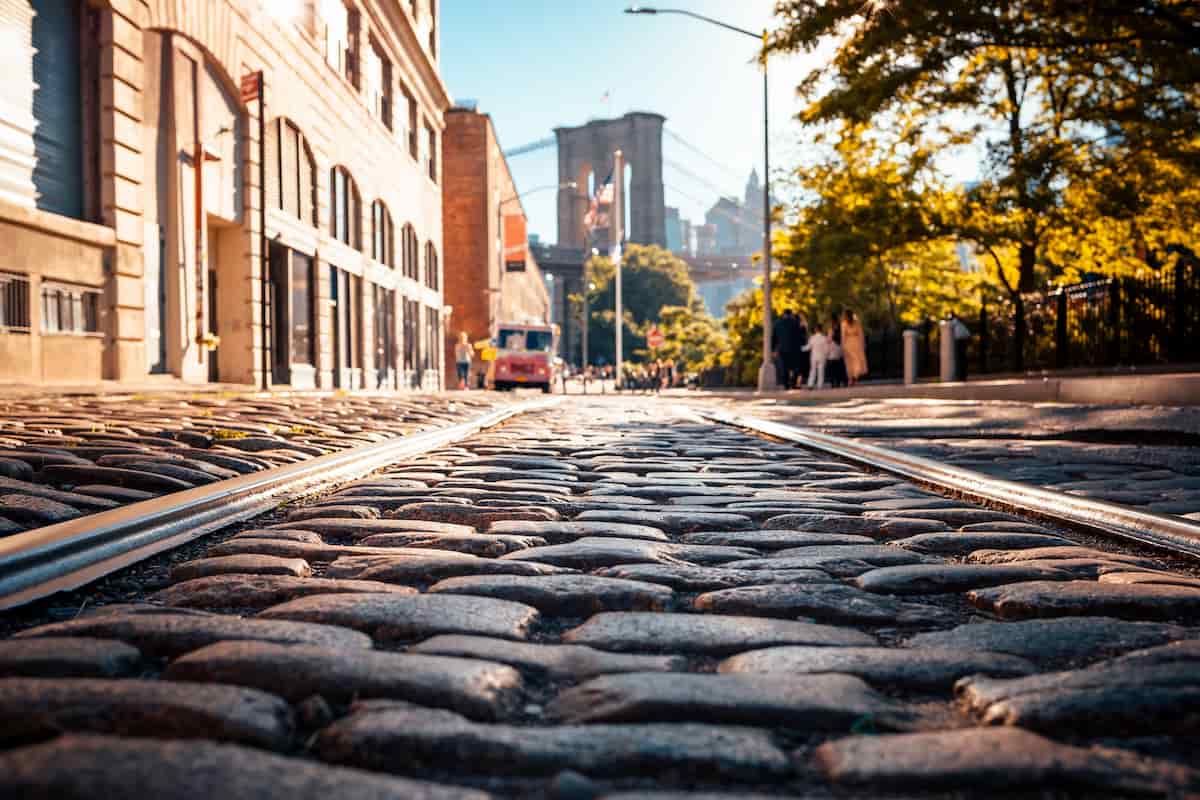 And yes, New York has the peculiarity of being a city where the places to see never end : an infinite maze is formed that leads us to travel as many times as possible, < strong> to photograph everything and to be surprised every time you walk through its corners.

The streets of New York are not pure taxis, skyscrapers and traffic, but rather, in the best set of Hollywood style, there are some hidden that seem out of a story. In them, the urban bustle disappears and every detail seems to be ready for a photo. In this post we will tell you which are the 15 most beautiful streets in New York, those that have that special something that attract the most detailed travelers and, hidden in the Big Apple that maintain that authenticity that characterizes them.

The most beautiful streets in New York

Surely those who have visited the big city and been asked where the most beautiful streets in New York are, the answer to the neighborhood that must be photographed is the West Village. As its name suggests, it is located west of the island of Manhattan, close to Greenwich Village and Soho.

For many, Grove Street is a household name, why? Because in addition to being one of the most beautiful (and photographed) streets in New York, the corner that connects it with Bedford Street, is one of the scenarios of Friends in New York, forming part of the apartment of the series (only used for the scene).

Did you know that the FRIENDS series was actually filmed at Warner Studios in Los Angeles?

Continuing in the same neighborhood, specifically in the Greenwich Village area, is this little street in New York that is worth visiting. Does it sound familiar to you? It is because the neighborhood and the surrounding streets served as the filming set for the movie Sex and the City, a perfect guide to the streets of New York and its so characteristic appearance.

The reality is that the house of Carrie Bradshaw, from Sex and the City is located on Perry Street, specifically at number 66 and, right at the back, you will find this street that we have been telling you about: Charles Street. Do you know who lives there? Sarah Jessica Parker herself! Super fan of New York.

Did you know that Sex and the City themed tours are held in New York? It is one of the best alternative tours to do in the city and discover incredible places.

If we talk about places you would never believe are in New York, then Sylvan Terrace should top that list. A place that seems that at any moment they shout “action” and the filming of a period film begins but that is located a few blocks from the classic bustle of traffic horns and the shadow of the skyscrapers of Manhattan.

Sylvan Terrace is an open-air museum, it is a row of wooden houses built in 1882 “supported” on a cobbled floor, green windows and stairs at the entrance, all arranged as if, literally, it was broadcast on the big screen.

We all agree that THE place to look for “hidden corners of New York” is Greenwich Village, right? Then it is the ideal place to move on a hot afternoon or, why not, on a cloudy day in the spring in New York. Ideal to put the map aside (what a faithful companion he is still in a city like New York) and let yourself be carried away by the charm of the most beautiful streets of New York.

Washington Mews is a very small street, located a few meters from Washington Square, in Manhattan. Mews, in English, means stables and, at the time, these houses served as stables of neighboring mansions, to “hide” the animals from the beautiful facades. A place that you definitely have to visit.

Walking through the most beautiful streets of New York is a great activity to enjoy the city from another perspective and, best of all, it is one of the best things what to do for free in the Big Apple.

We refuse not to choose Greenwich Village as the place to photograph the best streets in New York and, this time, we move away from the tourist mass and find Commerce Street, a street “guarded” by houses from 1850.

Leaving (our favorite) Greenwich Village and entering in the most “costume” part of New York, you arrive at the Financial District, south of Manhattan (yes, the place where Wall Street). There, as if hidden between skyscrapers and offices, is Stone Street which, as its name says, refers to the cobblestones that make it up, because it is, in addition to being one of the most beautiful, one of the oldest streets in New York.

Along Stone Street, it is possible to enjoy the breweries that function as “After-Office” after working hours, being one of the best plans to do in New York in spring, especially.

Well, it is not Greenwich Village but it is right next to the Soho neighborhood, the ideal neighborhood to get carried away by New York shopping and investigate the stores everywhere that flood the neighborhood. Soho is also the place for photographs of those corners of New York that look like something out of a magazine and that is where a visit to Greene Street is almost obligatory.

Call for instagramers! Greene Street is one of the typical New York streets where you can see the iron stairs for fires of all the movies filmed in the city and which, unlike others in the city, is one of the streets with the most stairs per square kilometer.

Well well, we cannot choose a single street in Greenwich Village and in this case, Gay Street competes with the rest of those that we have been naming in the unspoken contest of the most beautiful streets in New York.

Unlike the neighborhood and its magnificent fight for LGBTQ + rights, Gay Street does not refer to the movement but the name comes from one of the families that resided in that place.

Between 5th Avenue and Madison Avenue, in the luxurious Upper East Side neighborhood, is one of those streets where one would say “And what famous people live here? ” because the mansions, the large windows and doors that could be for a giant are those that protrude from the street and invite travelers to be surprised, even with the large chandeliers that hang from the ceiling and can be seen from the street.

We could not decide on a particular street, so the best recommendation is to walk through the streets and discover the wonders of the New York neighborhood.

Chinatown in New York is one of the must-see places to visit, especially on a first tour of the city. A chaotically beautiful neighborhood, with restaurants and shops where you can buy practically what you can think of and an ideal place to learn about Chinese culture within the United States.

Doyers Street used to be a street with a bad reputation, a street where brothels and street fights abounded until, to this day, was transformed in such a way that it corresponds to the list of the most beautiful streets in New York.

In the wonderful streets of Brooklyn Heights there are impressive houses and of course, little streets that are worth photographing . In this case, we go back to the times when New York had stables, although it is hard to believe, and we find Grace Court Alley, old stables that today captivate the hearts and cameras of travelers.

Continuing through this fantastic neighborhood, we find this little street in New York that could also be part of a magazine and that is that place, where a photograph, is almost as necessary. The street does not have a particular history, but the facades were simply kept inside the residences of the New Yorkers. Although there is a secret…

The best kept secret on Joralemon Street is at number 58 which, at first glance, looks like a home like all the others but, on the inside, is a ventilation and outlet tunnel for New York subway emergency. How are you?

The best New York photo can be found in one of the most picturesque streets in the world and of course, one of the must-see streets of New York (a must, really). Dumbo is a bohemian and hipster neighborhood in Brooklyn that, in addition to having bars, terraces, markets and carousels (ideal for visiting New York with children) has the best views of the Manhattan skyline.

Washington Street and its intersection with Water Street can be somewhat affected by the presence of tourists, although, in moments of “solitude” the enviable views of the bridge can be appreciated, as it is framed between the red buildings.

Harlem is one of those New York neighborhoods that had a very low reputation but, over the years, is seeking to reverse this situation, that nothing echoes what happened by its streets many years ago. Although it is a reality that is not one of the most touristic neighborhoods in the city, it has little streets that are worth not getting lost, especially if you are walking through the neighborhood.

Residential houses, demonstrating the appearance of the streets “without tourists” of New York (which are few), create these “magazine” facades that cannot be missed.

It can go unnoticed, it can be found as just another street in the New York neighborhood but it is definitely one of the most beautiful streets in New York. Not only is it a classic postcard of the city, due to its iron stairs, but also its houses from the colonial era, stand out from the rest of the city and, not least … nothing more and nothing less than a bridge crossing the street and crossing from one building to the other, built in 1907 to connect what used to be a hospital, with its annex.

New York has that peculiarity so characteristic that makes a traveler want to return as many times as it is presented to him: surprises. A city where being surprised is not a difficult task and where one can expect to see buildings, bustle and traffic chaos, one finds an urban oasis, small sidewalks, houses of 100 years old, trees and silence. How is it possible? It’s New York, anything is possible.